A Disturbance in the Force: Flare Star Becomes 15 Times Brighter In Less Than Three Minutes

"They could have warned us first," said an onlooking alien who is now blind in six of his eyes. 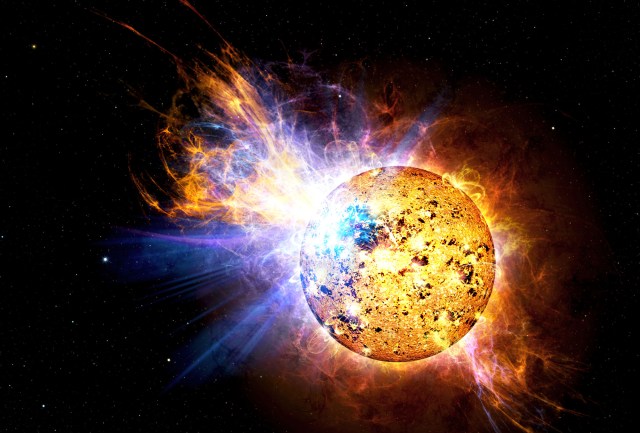 Space flares are so friggin’ cool. Well, not literally, because they are giant eruptions of heat and light, but you get my meaning. Case in point? Astrophysicists at the University of Santiago do Compostela in Spain, along with the Byurakan Observatory in Amernia, detected a low-intensity star letting out a flare so strong it became almost 15 times brighter in a matter of minutes. You know that feeling you get when you wake up in the middle of the night and almost blind yourself with your phone while checking the time? Imagine that, but, like, times a billion. In space.

WX UMa, part of the Ursa Major constellation about 15.6 light years from Earth, is overshadowed by the much larger star in its binary system most of the time. A few times a year, though, it gives off flares like these. This one, though, is the most powerful on record.

Researcher Dr. Vakhtang Tamazian says that this particular flare was so strong that it actually changed the spectral type of the star it came out of, “from spectral type M to B; in other words, it went from a temperature of 2,800 kelvin (K) to six or seven times more than that.” So basically, it started out hotter than you can  conceive and then got six times hotter from there. Yikes.

Scientists still don’t know exactly what causes these flares, but Tamazian hopes that by studying this powerful example, as well as flares in other binary star systems, we will be able to gather more information about the “changing states and physical processes” by which stars evolve.