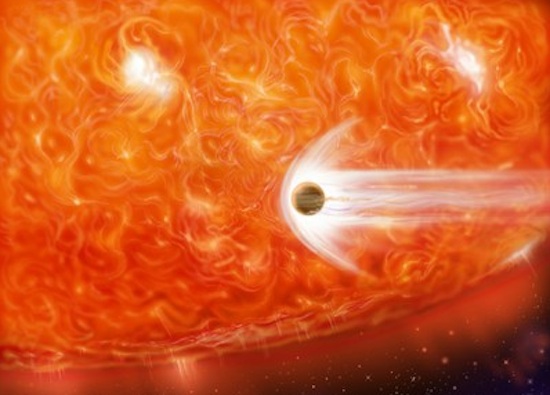 We all have plenty of things to worry about and be frightened by in the course of a given day. Paying the bills, getting to work on time, making sure we don’t step in front of a bus while texting. Apparently, though, researchers at Penn State University think we could all use one more thing to have anxiety over: The Earth will eventually be swallowed by our own slowly dying sun, just as the red giant star BD+48 740 did to one of its planets. It’s the first time that astronomers have been able to observe, in some way, the consumption of a planet by its aging star. Sure, that fate is probably 5 billion years in the future for the Earth, when we’ll all be long in the ground, but knowing it certainly doesn’t make us sleep any more soundly right now.

Researchers studying BD+48 740 and searching for exoplanets around it noticed something off in the mass spectrometry of the aging star — it was sending off a lot of lithium. Stars destroy lithium very quickly, so it’s rarely present in their makeup. So where was this sudden appearance of the unlikely element coming from? The safest bet turns out to be that it’s a cosmic burp, marking the remnants of a planet now long digested by the star it once orbited.

BD+48 740 still has one lonely planet orbiting it — a gas giant larger than Jupiter travelling in a radically elliptical orbit that researchers have never seen before. That odd orbit provides further evidence that the environment surrounding this star has gone through some changes. The speculation is that the remaining planet’s orbit was once more regular, but was transformed by the energy released when its planetary sibling plummeted to a fiery doom in the heart of an expanding star.

Despite how terrifying this development is for nervous folk like myself, researchers point out that they are incredibly lucky to have witnessed this act of cosmic destruction, which happens so quickly (cosmically speaking) that it’s rare to catch a glimpse of. The researchers now turn their eyes to other ways they can watch planets be destroyed, hoping to get a look at Galactus in the coming years.

(via PSU, image via NASA)