Your First Look at Brie Larson All Suited Up on the Captain Marvel Set! 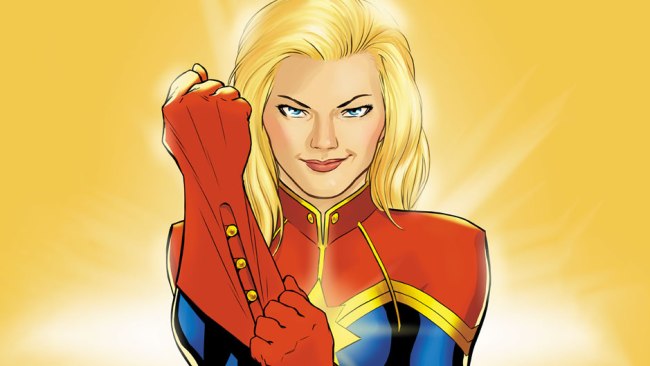 Ever since Brie Larson was cast as Carol Danvers, A.K.A. Captain Marvel in the Marvel Cinematic Universe, we’ve been on the edge of our seats waiting for her arrival on the big screen. While we still have a ways to go before her solo film finally drops, we can now get a glimpse of what she looks like in the suit!

Thanks to MCU News & Tweets on Twitter (and Page Six, where you can see more photos), we can have a look at photos from the set of Captain Marvel:

First of all: EEEK! THIS IS REALLY HAPPENING!

Now, on to more pressing matters.

The suit: Loving the flat boots with no heels, and I love the look of the suit on her! Is it weird that it’s green? Sure, but I’m guessing that this is an early suit that will evolve, as suits have evolved for superheroes since time immemorial (or at least since the beginning of comic books), into the iconic red, blue, and gold that we all recognize.

The hair: Is it weird that it’s a bob and not the shorter hair Carol is more known for? Kinda. But as you can see in the art above from the cover of Captain Marvel Volume 1: Higher, Further, Faster, More (2014), this isn’t the first time that Captain Marvel has canonically had longer hair.

What I love most is that Larson looks completely at home in it. Little details like colors or haircuts matter less to me than the feel of an actor as a character. I look at these photos, and I can see Carol Danvers in them. It’s pretty amazing.

So, why is there filming going on now instead of in March? Are we sure that it is indeed Captain Marvel that she’s filming here?

MCU Exchange has an explanation. Many film productions travel outside of Los Angeles to film in places like Atlanta because of their tax breaks. However, Marvel’s Kevin Feige has stated a desire to return to shooting in California, which they haven’t done since Captain America: The Winter Soldier.

“Last year, Feige and Marvel Studios applied for the California Film Commision’s (CFC) Tax Break 2.0. They received the tax break and on July 24th the news was released via Deadline. The CFC awarded Captain Marvel, under Warbird LLC, $20, 756,000 in tax credits. That’s a lot of money and money like that always comes with conditions.

In short, those conditions were that, among other things, Marvel had 180 days from the time they received the tax break to begin principal photography in California or they would lose it. Based on documents that are available in the public record, they were granted the break on July 24th, which they had until the middle of this week to begin production of Captain Marvel in California.”

However, now that they’ve started, “they can take up to a 120-day hiatus from production without any risk of losing the tax break.” So, they just needed to shoot something now to hold on to the tax break, then start full production in March as originally planned.

Oh the glamour of the nuts-and-bolts of filmmaking!

Bottom line: Captain Marvel is in full effect. She’s coming, you guys, and I can’t wait!

Is it too early to start dreaming about an A-Force movie?