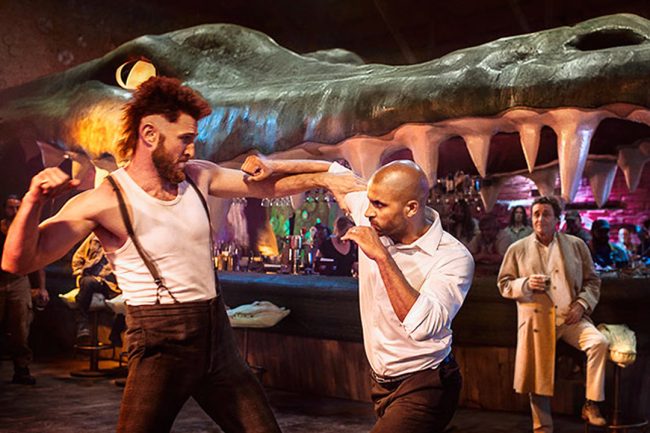 Reviews and plot details from American Gods are on pause until later in April, but I’ve started watching the show and let me tell you, friends: HOLD ON TO YOUR HATS.

I’ll admit that as a fan of Neil Gaiman’s American Gods novel, I was skeptical about how live action media could capture the written narrative’s magically trippy feel. WELL, I AM WORRIED NO MORE.

This show looks unbelievably, no-holds-barred STUNNING. Remember how show co-developer (with Michael Green) and executive producer Bryan Fuller’s Hannibal and Pushing Daisies were some of the most aesthetically delicious series to grace the screen?

American Gods has Fuller’s fingerprints all over it and the richness of detail, color, costume, props, sets, locations, and special effects are just. Like. WORDS, I HAVE NONE. But I can say with confidence that American Gods is like nothing you’ve ever seen before.

Pictured: Me gobbling this up (image: NBC’s Hannibal)

ALSO I NEARLY FORGOT TO MENTION THIS BUT THE SOUNDTRACK IS GOING TO CHANGE YOUR LIFE.

THE ACTORS. Hoo, boy. I need a moment here. I was excited by the recent promotional character posters—everyone looked great, and there are well-known folks in the cast I’d anticipated seeing. All I can say on this account without revealing too much is that Ricky Whittle (Shadow) is a heroic statue of the perfect man somehow given life and taken to acting, and that I’m currently constructing an altar to Ian McShane in the corner of my living room.

Every time a new character is introduced, my face gets frozen like this:

At a point in the episodes I saw, there’s a scene involving Orlando Jones’ Mr. Nancy and I can tell you that I did not breathe for the entire duration of it, and then I died and ascended to a higher spiritual plane. It’s some of the best TV I’ve ever witnessed.

THE ACTION. Yowza, y’all. American Gods is not for the children, unless you have really chill kids. There’s a lot of violence and a lot of sex, and it’s all goddamned gorgeous to watch unfold. Step it up, Game of Thrones, you’re looking a little medieval by comparison.

In conclusion, I only got to watch two of the four press episodes last night, and they end on such nail-biting cliffhangers that I’m literally watching the clock until the end of the day arrives and I can watch more. IT IS ALMOST THAT SACRED TIME.

American Gods premieres on Starz on April 30th, but I’ll be back with dispatches in the interim. That is if I survive through the experience—because I am on the edge of my seat, about to fall over.