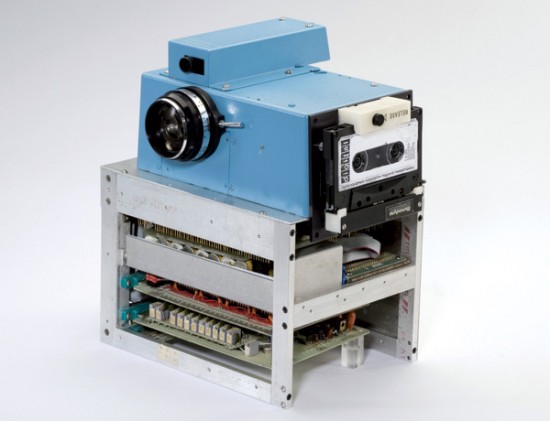 The first portable digital camera was a Frankenstein contraption, created by Steve Sasson and his team at Kodak in 1975, cobbled together from existing Kodak parts and other modern-at-the-time technology. The camera consisted of a Super-8 lens, 16 nickel-cadmium batteries, a charged-coupled device for converting light into digital signals, and, oddly, a digital cassette recorder. The images created consisted of 10,000 pixels, or 0.01 megapixels. For comparison, the camera on the iPhone 4S sports 8 megapixels.

The charged-coupled device took 23 seconds to actually record the image to the digital cassette, then the cassette had to be removed from the camera and placed into custom-made device that display the image on a television. Amusingly, when Sasson showed off the device, Kodak asked him why anyone would want to view a picture on a television, and it was later revealed in a technical report that Sasson felt that type of viewing system would define the pictures are taken in the future.

With programs like iPhoto, smartphones’ camera rolls, and every video game console coming with some kind of photo storing and viewing feature, we can’t help but smugly smile at Kodak’s puzzlement of why people would ever want to view their pictures on a digital screen.