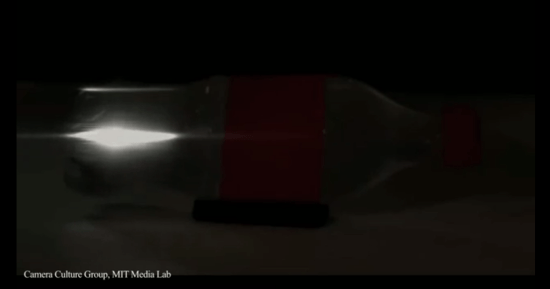 High-speed cameras are pretty awesome. So awesome, in fact, that Discovery has an entire series devoted to just shooting things with them. Some of the more impressive ones will capture around 40,000 frames per second, but a new camera developed by Andreas Velten and Ramesh Raskar at MIT blows that out of the water with an almost unbelievable 1 trillion frames per second. That’s fast enough to capture footage of traveling photons.

In order to achieve such ridiculously impressive results, the camera utilizes some relatively unconventional tactics. The camera, actually called a streak camera, measures the times at which photons pass through its slit-shaped aperture and then through an electric field behind it. That being the case, the camera can create a two dimensional image, but the caveat is that because of the slit shape, one of those dimensions is going to be time.

Fortunately, there’s another unconventional tactic that helps mitigate this; in order to get a more conventional photograph, you just have to do the same experiment over and over and over, moving the camera each time. If that sounds a little limiting to you, that’s because it is. Not only does that mean that creating photographs or footage with this camera is time-intensive — leading Raskar to dub it “the world’s slowest fastest camera” — but it also means that anything you want conventional footage of has to be 100% repeatable so that you can get it from multiple angles. You won’t be using this camera for explosions or bullets or any of that fun stuff. Its main application is for light.

All that being the case, it still has a wealth of applications. Such a camera could allow ultrasounds to be performed with light. It also could really affect the camera industry, but not in the way you might think. This camera, by virtue of its ability to meticulously record light reflection, could aid in the development of much better flashes for the consumer-model cameras you and I use. More importantly however, this high-speed camera can capture the movement of photons. Did I mention that? How wild is that? Anything else is just gravy.