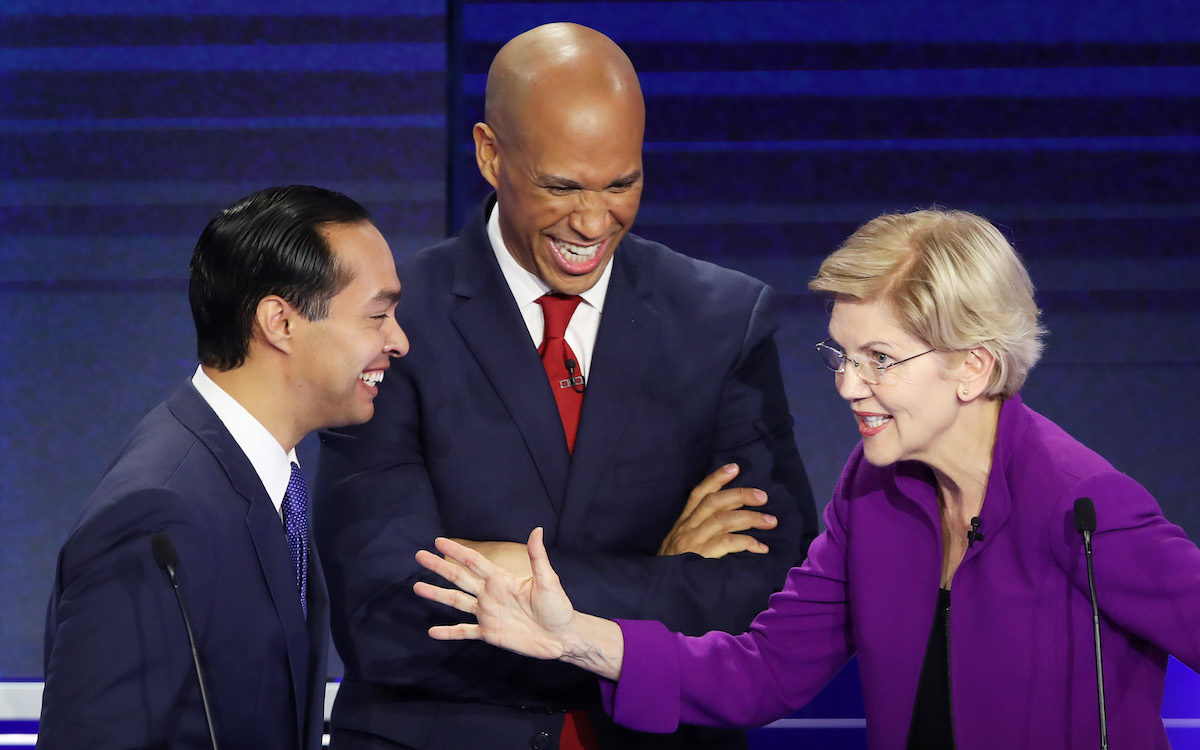 Last night was the first Democratic debate and with ten candidates onstage, a lot happened.

Let’s talk about who came out on top.

Warren was the frontrunner from her grouping going into last night’s debate, and with the exception of a few people who just don’t like it when women speak or express any emotion other than maternal warmth, it’s hard to imagine her numbers going anywhere but up. As we talked about yesterday, these early primary debates aren’t really debates; they’re “PR opportunities” for candidates looking to have a standout moment and break out of the pack.

Warren, though, showed up for a debate. She showed up prepared and ready to talk details and make decisive declarations on a whole range of issues.

Warren first to raise her hand in favor of abolishing private insurance. Instantaneously.

Her performance might not have had enough wow factor to hook a ton of voters who didn’t already have her on their radar. But it was absolutely impressive.

Warren is the only one not forcing herself into the conversation and I dunno if that’s to her benefit or detriment.

If one person succeeded in having that breakout moment and making people take notice of him, it was definitely Castro. He not only was able to share his bold immigration plan, but he challenged the other candidates to join him in his proposal to decriminalize border crossing, meaning he got to steer the debate around the issue–an incredibly impressive thing for a lesser-known candidate on a stage with nine other people.

Other candidates tried to do this throughout the night–most notably Bill de Blasio, who repeatedly challenged Beto O’Rourke on issues–but none of them were as successful as Castro.

Also, immigration wasn’t the only issue where he stood out. He had a number of great, strong moments.

“I would start with something we should have dong a long time ago: pass the Equal Rights Amendment.”

I gots up to go to the bathroom and my mom starts yelling “Julian Castro is talking about reproductive justice and trans rights! Get back here!”

She knows what’s up. #DemDebate

He really earned this:

.@JulianCastro has spiked +2,400% in search since the #DemDebate started.

Who didn’t do so well?

Beto was outclassed on that stage by people with far more experience than he has and it showed. He seemed to have a target on his suit jacket as other candidates directly challenged him. (Castro at one point chastised him for not being more informed in regard to his immigration plan, telling him “If you did your homework on this issue, you would know.”)

It wasn’t just those attacks he had trouble responding to, though. He very obviously came in with stump statements he wanted to give, and he espoused them, regardless of what had been asked. He was repeatedly asked to just answer the question after he’d used up his time on other things.

Pretty much all the white guys.

If you didn’t know their names going into last night, you probably don’t know them now. I don’t know if any of these guys will be in the next round of debates.

As for the middle of the pack, Cory Booker did fine. I doubt he became anyone’s new favorite last night but he did speak more than any other candidate so he probably at least made an impression. Also, his comments on gun violence were powerful and he directly attacked the gun lobby and the idea of “thoughts and prayers” without action.

Amy Klobuchar didn’t make much of an impression. Tulsi Gabbard was … also fine. She didn’t embarrass herself–or at least, not on the stage. At one point, this pettiness was tweeted from her account:

It’s clear who MSNBC wants to be president: Elizabeth Warren. They’re giving her more time than all the other candidates combined. They aren’t giving any time to Tulsi at all. -V (Tulsi’s sister)

There were more big moments but these were the ones that stood out to me. Let me know what your favorite/least favorite/most WTF moments from the debate were in the comments.

And now we get to do this all again tonight with 10 new candidates!

NBC just flat out said that tomorrow is about Biden, Sanders, Buttigieg, Harris, “and six others.” Absolutely savage.