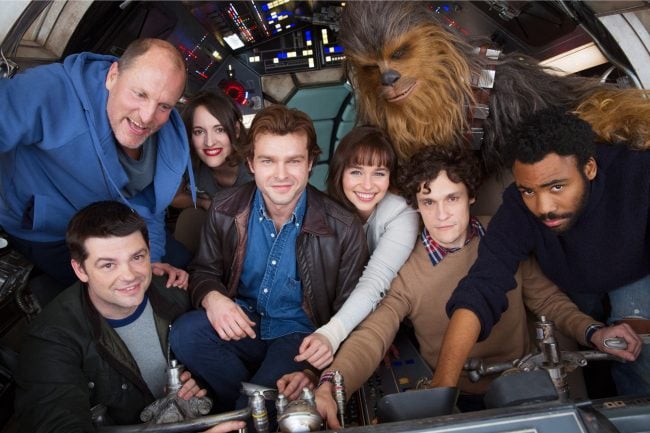 Rejoice, Star Wars fans! Disney and Lucasfilm have released our first glimpse at the cast of the upcoming young Han Solo anthology film!

It’s amazing how many people (and wookies) can fit into the Millennium Falcon cockpit, isn’t it? According to /Film:

Woody Harrelson who is playing Han’s criminal mentor, directors Phil Lord and Christopher Miller, Alden Ehrenreich, who is playing Han Solo, Emilia Clarke, who is playing an unknown female role (originally thought to be a love interest), Donald Glover, who is playing the iconic role of Lando Calrissian, Phoebe Waller-Bridge (who last week jokingly denied being in the film), who is reportedly playing the first significant female droid in Star Wars history, and Joonas Suotamo, who was credited as Peter Mayhew’s double for Star Wars: The Force Awakens, is under that furry suit as Chewbacca.

Also in the film, though not pictured, is the inimitable Thandie Newton.

Directors Lord and Miller released a statement saying, “Watching such inspired people from all over the world, with such unique voices, come together for the sole purpose of making art, is nothing short of miraculous. We can’t think of anything funny to say, because we just feel really moved, and really lucky.”

The still-untitled film was written by Lawrence Kasdan and Jon Kasdan. Kathleen Kennedy, Allison Shearmur, and Simon Emanuel will be producing, along with co-producers Kiri Hart, Susan Towner, and Will Allegra. Lawrence Kasdan and Jason McGatlin will be Executive Producing.

The untitled Han Solo Star Wars Story is slated for release on May 25th, 2018.