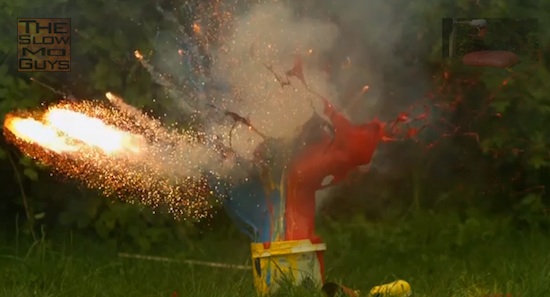 What does it look like when you dunk explosives into buckets of paint and set them off? Well, it looks like an unholy mess, of course. When you’re filming at 1600 frames per second, though, even an unholy mess looks rather beautiful. Straightforwardly named Intertube filmmakers The Slow Mo Guys have broken out their Phantom camera again, this time to capture the spectacle and splendor that is a bunch of paint buckets exploding, confirming once again that every knucklehead stunt you and your dumb buddies pulled off in sixth grade would have been art if you had had a very nice camera to film it with. We’re especially fans of the shots where it looks like the paint is running away from an exploding car like it is in an action movie, but by all means — check out the results for yourself below.