Because girls have cooties? 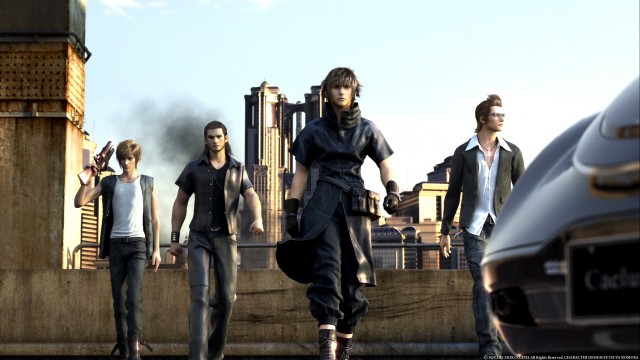 Final Fantasy XV looks amazing. …And by that I mean its visuals. Its gender representation, on the other hand, looks terrible. The game’s main party is dudes-only as we had previously feared, and Hajime Tabata, the director, not only made that choice consciously, but specifically to make the game “more approachable” for players. We’ll pause here to let you pick your head back up off your desk.

Ready to continue? In an interview with GameSpot, Tabata said,

Speaking honestly, an all-male party feels almost more approachable for players. Even the presence of one female in the group will change their behavior, so that they’ll act differently. So to give the most natural feeling, to make them feel sincere and honest, having them all the same gender made sense in that way.

And of course, that “same gender” is male, because that’s the default, right? Actually, no (but really also yes). It’s because Tabata wants to tell a “boys will be boys” story. Male as default? “Boys will be boys”? Is there some kind of gender-bias bingo card he’s trying to fill out here?

But don’t worry. Tabata thinks the time to tell the unheard stories of boys fighting monsters and camping in tents is now:

The world might be ready to see the curtain lifted on what boys do when girls aren’t around, when they come out of the tent all prim and proper. That’s kind of the idea behind it… we think, male or female player, that everyone will feel a certain connection and bond with the four characters.

Move over, girls. After all the patient waiting, the world is finally ready for stories about boys!

Our time is now!

Or here’s a revolutionary idea: you could put a female character (or two! Go nuts!) in the mix who isn’t there solely to function as romantic involvement and is just as much a platonic part of the gang as everyone else. Boys don’t own friendship. Despite what romcoms have told you, boys and girls can be friends. Also, hey, you’re the one making this game; you can make the characters act however you want. Don’t want your male characters to change their behavior if there’s a woman in the group? Don’t change their behavior. Pretty simple if you ask me.

Don’t get me wrong; it’s OK to tell stories about boys. Just don’t claim that you’re doing it to make players of all genders feel more comfortable. Don’t act like it’s something new that the world doesn’t already have plenty of. If you want to make Final Fantasy: Entourage, have the courage to admit that you don’t care whether women will want to play your game.

That might not change anyone’s mind about buying it, but at least it’d be honest.