New Fiber Network Clocks in at 99.7% Speed of Light, 73.7 Terabits Per Second 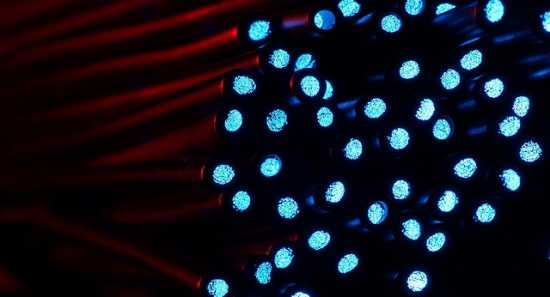 Fiber optic cable is responsible for some of the fastest data transfer speeds on Earth, and a new type of fiber just got even faster. University of Southampton researchers have created fibers that can transmit data at 99.7% the speed of light. That means data can be transmitted up to incredible speeds like 73.7 terabits per second, but what it doesn’t mean is a faster Internet connection for us common folk.

Here’s why. First, start by realizing that when companies like Verizon say their fiber optic cables transmit data “at the speed of light,” they are essentially lying. The speed of light is 3 x 108 meters per second through a vacuum, but passing it through a medium like glass slows it down significantly. Current fiber optic cables see a 31% decrease in speed as light passes through them, but the new design bumps that decrease down to a scant 0.03%.

So while yes, current fiber optics transmit data as fast as light is able to pass through them, they’re far off from the actual “speed of light” as we commonly think of it.

The reason the new fibers come so much closer to the true speed of light is that they are hollow. That’s because light passes through air a lot better than it does through something like glass. Hollow fibers have been tried before, but they lose the benefit of the refractive index — lights ability to bounce around within a medium — that glass or plastic fibers have. It’s that ability that lets current fiber optic cables transmit data even as the cables bend.

These new fibers are redesigned to remain hollow while still being able to be bent using an ultra-thin “photonic-bandgap rim.” Although much faster, the new cables do have a loss of 3.5 dB per kilometer, which means — at least for now — they won’t be replacing the fiber optics currently in use for transferring data across long distances. The applications for short-distance transfers, however, are promising. For example, the new cables could be used to greatly increase the speeds of supercomputers and data centers.

(via ExtremeTech, image via go_nils)