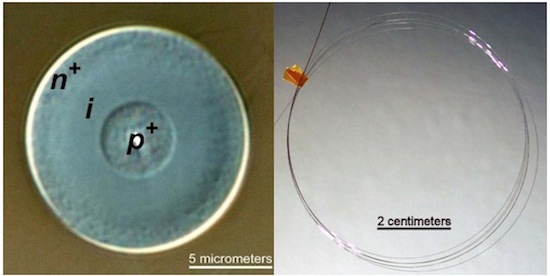 A team led by Penn State researchers has succeeded in building silicon fibers thinner than a human hair that can act as solar cells. If the work scales up to produce longer fibers as well as the team thinks it could, these solar energy absorbing threads could be woven into clothing in the future. So if you’ve ever wanted a jacket that can pull in energy through the fibers it’s made of and use it charge your phone while you take a stroll in the park, take heart — you might be getting it sooner than expected.

A paper describing the research, published online today in the journal Advanced Materials, builds on earlier work the team did creating hair-thin fibers with integrated electronic components. Rather than building fiber optic that can use power, though, the team is now working on crafting fiber optic threads that can produce it.

Instead of attempting to turn a solar cell into a fiber, the team came at the problem from the other side, working to turn a silicon fiber into a solar cell. Using the same high-pressure chemistry techniques they developed in their earlier work, they placed tiny particles of solar cell materials layer by layer into the pores of the thin silicon cable. The result this time is a thin fiber that can absorb solar radiation turn into into electricity. Says lead author John Badding:

Long, fiber-based solar cells give us the potential to do something we couldn’t really do before: We can take the silicon fibers and weave them together into a fabric with a wide range of applications such as power generation, battery charging, chemical sensing, and biomedical devices.

The team says they’ve made meters long strands of the fiber, and is hopeful that the technique they’re using could produce fibers up to 10 meters in length without problems. The hope is that this early work will one day translate into foldable, windable fibers that could power or charge electrical devices on the go by harvesting the solar radiation around them — an application the military has expressed no small degree of interest in.

They’re not the only ones. I, for one, am sick of walking around in clothing that doesn’t actively power my growing legion of personal electronics. Like a savage. I’m ready for the future today, and the future is a pair of solar powered pants.