The chocolate makes it go down easier. 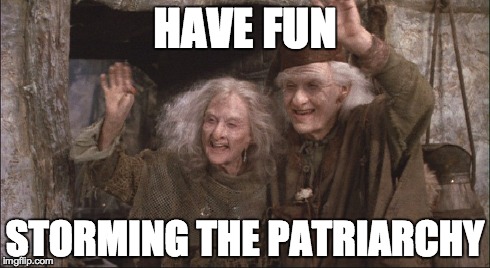 It’s got everything–fencing, fighting, torture, revenge, giants, monsters, chases, escapes, true love, miracles, quotes from that movie you liked as a kid, gender equality. Give it a gander!

Our story begins with Canadian writer Anne Thériault’s reaction to Time Magazine’s ridiculous list of words to ban, which, if you don’t recall, contains the word “feminist” for some reason.

Having @time include feminist on their words to ban list makes me want to say it even more, like a petulant child. Feminist, FEMINIST.

And then fellow Canadian writer Aaron Wrotkowski realized something.

@anne_theriault I was thinking more, “You could keep using that word Time. I don’t believe it means what you think it means.”

@anne_theriault “You mock my feminism!” “Life is feminism, Highness. Anyone who says differently is selling you something.” That… worked.

And then it pretty much went exactly as you’d expect.

“I’m not a witch, I’m your social equal. But after what you just said, I’m not sure I even want to be that anymore.” #feministprincessbride

Max: Not what he said! He distinctly said “A quoll pay,” and as we all know, a quoll is an Australian marsupial! #feministprincessbride — David Thomas Moore (@abaddondave) November 14, 2014

YOU WERE SUPPOSED TO BE THIS COLOSSUS, YET HE GAINS! Feminism: I’m carrying three people and he’s got only himself. #feministprincessbride — kim wells (@dandeliondreams) November 14, 2014

“Who smashes the patriarchy?” “Nobody. It lives.” “You mean misogyny wins? Jesus, what’d you read me this thing for?” #feministprincessbride — Lea Grover (@bcmgsupermommy) November 12, 2014

“We were both poisoned. But I spent the last few years building up an immunity to toxic masculinity.” #feministprincessbride — misreading (@miss_reading) November 12, 2014

Got a good one to join in with? Share them with us at @TheMarySue!

(via Splend42 on Tumblr)