"They’re not wrong that I was skinny, and now I’m not anymore. So what?" 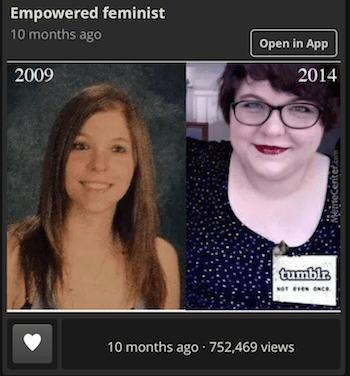 It goes to show that, even if you don’t post certain photos on the Internet at all, where there’s a douchebaggy will, there’s a way.

In a piece for Jezebel, writer Hale Goetz reveals the too-ridiculous-to-be-believed story of how she was alerted by family and friends to a photo of her having ended up on Reddit subreddit r/funny. She’d never posted a photo of herself from high school online, which is where the above “2009” photo was taken (which was actually from 2007). However, a former classmate scanned the yearbook photo and put it up on Imgur juxtaposed with a more current photo of Goetz, which is on the right. The new image was titled “Empowered Feminist,” framed as a cautionary tale…against feminism? Like, don’t be a feminist or you’ll gain weight?

Eventually, that image made its way to r/funny. At first Goetz, along with her family and friends, was livid. But then, Goetz started laughing, because she realized the absurdity of the entire thing. In her essay on Jezebel, she wrote:

“Well, they’re not wrong?” I said, shrugging on that last word, my inflection suggesting a question. They’re not wrong that I was skinny, and now I’m not anymore. So what?

So what indeed? Apparently, over 750,000 people have looked at the image, many making “fun” comments, which means that 750,000 reading reddit find fat inherently funny. Or alternately, find someone “insulting” someone with the “fat” descriptor funny. That’s what I find hilarious. Growing up, when people called me “fat” trying to insult me. I would think,  Um…trying to insult me by calling me fat is like trying to insult me by saying “you’ve got two legs!” Stating a fact at a person isn’t an insult.

Goetz not only realized that, but found it especially funny, because she really liked how she looked in the “cautionary” “After” photo:

I think I look pretty good in that “after” picture, the one on the right where I am very fat. It’s from when my now-husband and I announced our engagement in June 2014, and it was taken on a MacBook near the best source of light in our shitty Chicago apartment. I think of my lipstick, dark red and painstakingly painted, as a moment of perfection frozen in time. If my husband’s face hadn’t been cropped out of the meme, you would see his bushy, red beard and thoughtfully closed eyes.

And this isn’t to say that she’s completely in love with her own body. She writes:

A lot of people in the feminist community encourage you to love your body no matter what, but I don’t. The love for my body is the same it’s always been: a little mark on the scale between annoyance and acceptance. I’ve lost 30 pounds since the picture on the right, and I’ll probably lose more, and then maybe I’ll gain some back. [….] To me, being fat is just another bullet point on my list of attributes, something factual but not all that interesting, like how I’m 5’6” or that I dye my hair.

However, whatever she feels about her body, it’s clear she loves herself, which isn’t defined by her body. She also loves her life and continues living happily, and so all her photos are beautiful ones, because they reflect her happiness.

Take that, haters. She’s too busy being happy to give a shit about your haterade.

(via Jezebel; Image via Imgur)