Feminism by Thoughtful Omission in Sci-Fi/Fantasy | The Mary Sue

Why aren't there more nontriarchies in SFF? 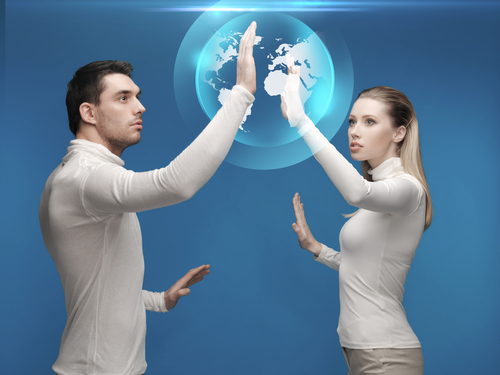 When I started showing an interest in science-fiction and fantasy, my mom—herself a lifelong fan of the genre—put stack after stack of books in front of me. The classics, the best of the best, the foundations upon which the genre was built, and all the ones who stood on their shoulders. It was practically a dragon’s hoard of fantasy books. But I was a stupid teenager, and I refused to read any of them on principle. I wasn’t going to be told what I’d like. I’d forge my own path through the genre, thank you very much.

I read a lot of bad books with awesome covers before my mom figured out how to subtly direct me towards good books. I’m still not sure how she did it, but I’m beyond grateful she found a way around my spiteful teenage surliness. It took me at least a decade to realize how well she had guided me through a genre fraught with tropes, clichés and toxic stereotypes; how deftly she showed me books that were thoughtful and responsible, as well as books that put no thought into representation or equality or differences. She stealthily provided me with a huge variety of books to explore, more than enough to discover what I liked or hated, more than enough to learn what was done well and what was done poorly. One of the things I learned—without ever actively learning it, just absorbing it as a given—is that women are, by and large, not treated very well in SFF. News flash, I know. But for a budding fan of the genre, as well as a young feminist-in- training, realizing that created a weird dissonance.

This has improved over the years, and I’m beyond happy that I’ve gotten to watch the genre grow into something better. Instead of having to latch onto the rare book where a woman is treated as more than a set-piece or a prize, there are a lot of books where women are presented as actual people, where women save the world, where women can just be. This is huge progress, and I love seeing it.

For every well-written female character, there are scores who are still stereotypes and tropes. There are still books that don’t feature women at all, or that feature only token female clichés. There are still writers complaining that women are too hard to write, that it’s better to not include women at all than to do a disservice to us by writing a woman poorly. Even worse is when people point to the handful of well-written women we have, and all the poorly-written women surrounding them, and say, “There. You got what you wanted. Isn’t that enough?”

I don’t want another Strong Female Character, a girl who’s Not Like Other Girls because she’s overcome her feminine qualities until the narrative demands that she embrace those same feminine qualities. I don’t want another badass woman who, as far as the narrative is concerned, is just One Of The Guys until someone can crack a joke about her being a woman. I don’t want more revenge-fantasy matriarchies that aim to show men what it’s like to be oppressed. I don’t want to imagine more futures where gender has vanished and androgyny rules, because that shouldn’t be the only way for everyone to be treated equally.

What I want to see are more characters like Baru Cormorant—an intelligent and ruthless woman who struggles constantly with her own identity, and completely earns her place of power in a society that values skills and merit. I want more settings like The Hunger Games, where boys and girls are set on equal (if horrific) footing, and no one questions the idea of girls fighting against boys—or, for that matter, boys fighting against girls. I want more fairy tales like Uprooted, in which a woman discovers and hones her own unique powers, rescues the man, and faces a complex and tragic villainess.

There’s one thing all three of those books have in common: there’s no gender-based societal rule. No patriarchy, no matriarchy. People succeed or fail based on their own achievements. Characters are compelling because of their personalities and the situations they face. The trials they overcome have nothing at all to do with women triumphing where only men have triumphed before.

You need to understand how rare and precious a thing this is. In these books, gender doesn’t matter. Gender exists, but it’s not a quality by which it’s worth judging another person. In a world where we’re fighting for equality, you’d think this would be a common thing—especially in science fiction and fantasy, where we can imagine any world, reinvent the past and create a better future. You’d think that, more often, we’d see books with this one perfect little piece of equality. It wasn’t hard for me to think of those three books, because that shared trait has stuck with me. But three is the longest list I can come up with, and that hurts. I wish I could name more than three books without a gender-based social system.

Why isn’t this more common? Why shouldn’t we be aiming for this ideal? We can acknowledge the ugliness of our current system, fight against it by pointing out and tearing down its flaws, highlight the horror of if the roles were reversed…or, we can imagine a better world. A world where these arguments aren’t necessary, a world where judging someone by what’s between their legs would be unimaginable—where women can do the same things men can do, not because of or in spite of their gender, but because women are people.

This “nonriarchy” approach might not be as powerful as a tough-as-nails fighter who cries at the sight of death, or a woman who claws her way to power despite all the men standing in her way. It might not hit us in the gut the same way a strong matriarchy does. But isn’t it more meaningful? Isn’t it more hopeful, to see worlds that can be better? “Teach by example,” as the saying goes. It’s why I chose to avoid a gender-based society for In the Shadow of the Gods—because that’s exactly the kind of society I want to see, and the kind I want to read about. All characters are simply people, and that’s just the way I want it.

This is fantasy, after all. Why not make it a good one?

Rachel Dunne is the author of In the Shadow of the Gods, the first book of a new dark fantasy series. She is an avid gamer, reader, and nerd, and doesn’t have enough time in the day for all her introverted activities. She lives in the Midwest with her great beast of a dog, Goliath.