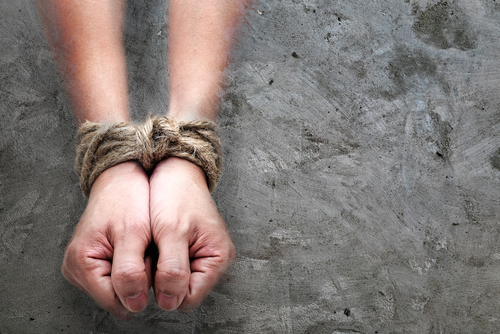 When her bosses at the NJ Sherriff’s Department became aware of the videos, six days before Hyman was set to graduate from the police academy, she was suspended without pay “because the sheriff’s office said her past, which she failed to disclose, is an embarrassment to the force.” According to NJ.com, “She was also accused of neglect of duty and other causes for disciplinary action after an internal affairs investigation, which was triggered by allegations about Hyman’s past.”

Hudson County Superior Court Judge Mary Costello reinstated her, allowing her to graduate and be sworn in, but she still has to face a disciplinary hearing—for something that happened long before she got this job—on June 27th. She’s currently working with modified pay.

The fact that she was a dominatrix was completely legal, and she did absolutely nothing wrong. Furthermore, she has emphasized that in the videos she was in she was never nude, never engaged in sex, everything was staged and consensual, and that while she was paid for making the videos, she doesn’t currently get any residuals. “[T]he proliferation of video and audio records … and or the promoting on social media … has resulted in the Hudson County Sheriff’s Office being the subject of inquiry and ridicule among law enforcement,” isn’t Hyman’s fault. It’s the fault of those who are doing the ridiculing.

Yet they’d rather capitulate to the “ridicule” of their fellow officers and take someone’s job away than just get on with it and let a new officer do her job. What is this, elementary school? Are we not equipped to handle “ridicule?” BOO HOO, THE OTHER POLICE CAPTAINS ARE LAUGHING AT US. WAAAAAH!

Also, as do many other police departments all over the country, I’m sure that NJ police have plenty of other, more valid reasons to be ridiculed and thought of as having less integrity: like their internal affairs divisions dismissing 99% of misconduct cases against NJ Police Officers (for shit they do while on the job), for instance.

No one puts every job that they’ve ever had on a resume. You pick and choose what puts you in the best light and shows off your specific qualifications for the job to which you are applying.

Let’s check out some of the choice language in the Post article: