In Praise of Letting Female Characters Be a Mess

I’m going to start this column the same way I started my very first piece for The Mary Sue nearly a year ago: by talking about female antiheroes.

In the time since that article, even though it focused on female villains, I’ve thought a lot about the jumping-off point: A lot of the flaws we accept in prestige cable’s Difficult Men are far less commonplace among female characters, even the less morally upright ones. One of the most defining aspects of this trend in male leads is not their moral ambiguity, but how we’re able to root for them even when they’re absolute messes of human beings, be it Tony Soprano’s woefully under-treated mental illness and parental issues, Don Draper’s alcoholism and philandering, Raylan Givens’ rage, or Rust Cohle’s nihilism. It’s far rarer to find a female lead with this kind of baggage, although oddly enough, it’s far easier when they’re the protagonists of comedies; It’s Always Sunny in Philadelphia’s Dee Reynolds, Nurse Jackie, and Girls’ Hannah Horvath are all master classes in not having your shit remotely together, as well as the show itself caring little for how these issues affect the characters’ “likeability.”

In the past couple years, however, the tide appears to be turning ever-so-slightly. ABC’s How to Get Away with Murder shares the entertaining, popcorn-y ludicrousness associated with producer Shonda Rhimes’ brand, but it also shares her well-documented enthusiasm for showing sides of non white-straight-male characters not commonly found on television. This is particularly evident in the show’s lead, law professor and defense attorney Annalise Keating (Viola Davis). Our first impression of Keating is as a stately, distant, and vaguely sinister mentor figure—not unlike Julian Morrow in Donna Tartt’s The Secret History—but as the story unfolds, not only do we see her as infinitely more complex than that, but as vulnerable and laid low in ways it would be hard to imagine at the beginning of the series. We see her hit rock bottom near the end of the first season, but it’s not difficult to watch; it simply makes her one of the best characters on network TV, not least because of a spellbinding single-episode performance from Cicely Tyson as her estranged mother. 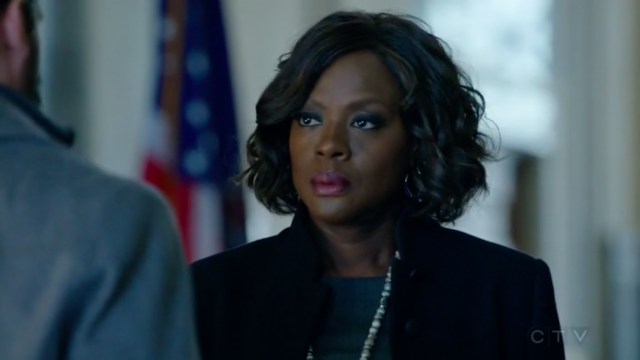 Similarly, last November brought us Netflix’s Marvel Comics adaptation Jessica Jones, which gave its protagonist many of those character defects normally reserved for the Difficult Men: Jessica is a cynical loner with a drinking problem, but none of that reduces her to simply a standard male noir gumshoe with the pronouns changed; the show is distinctly female-centric and distinctly feminist. Its plot and themes aren’t just metaphors for consent, abuse, and rape culture; these themes are what the show is explicitly about, and it pulls off this relatively untested ground for a comic property without fretting over whether it will alienate audiences to make its heroine recognizably human.

When I had the idea for my first novel, Judith, in late 2012 (available for pre-order here; if I get to 250 by May, they’ll publish), my first thoughts weren’t of the protagonist. Rather, the first idea I had was the organization of the title, a vigilante group that executes rapists and abusers who evaded justice. The more thought I gave it, though, the more it became a story about the people in pursuit of them, and from that development came Detective Katherine Kinneavy.

Kinneavy, who ends up on Judith’s radar when she’s assigned the case of the vigilantes’ first killing, represents a lot of what I wanted to read in a heroine and what I’ve written about wanting to see more of: she’s a female perspective at the center of a noir story as well as a plus-size woman with characterization beyond her size, but as I wrote and she became the center of the narrative (far more so than her co-protagonists, journalist Wendell Roane and Mafia capo Joe Cataldo), she also acquired the kinds of flaws and complexities that have long been the exclusive purview of male characters in such stories. She’s an alcoholic and a trauma survivor with what could charitably be described as an “Irish temper,” but none of this keeps her from being the hero of the story. Rather, it makes her a real person who’s doing right despite whatever personal or environmental limitations she carries on her shoulders. The experience of writing her proved self-perpetuating; I enjoyed writing this kind of complex, human female character so much that it bled into the novel’s other female characters like Jalisa Thorpe, the ADA who’s Kinneavy’s best friend; Captain Meghan Neville, her perpetually stressed superior; and even Judith themselves. In other words, when you write one strong, complicated female character, you find yourself wanting to write more. They’re authorial Pringles.

Throughout the book’s three-year gestation period, I often found myself frustrated over how long it was taking to spin my ideas out to book length, but in hindsight, I’m extremely grateful that it took long enough to write that I had the chance to become acquainted with characters like Jessica and Annalise, in all their complexity and imperfection. I was also lucky enough to be able to draw inspiration from real life as well, shaping the characters based on invaluable feedback from the strong, fierce women in my life who were patient enough to read the manuscript as I wrote it. That, in the end, is what compelling fiction should be shaped by: not just the great works and characters that came before, but the people the author is lucky enough to know.

Zack Budryk is the author of Judith, available now for pre-order. He blogs at autistic-bobsaginowski.tumblr.com and tweets as ZackBudryk, appropriately enough.