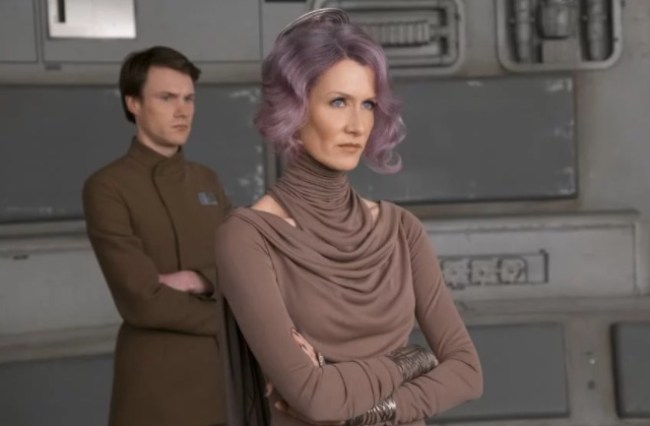 When pictures first surfaced of Laura Dern and her new beau, Golden State Warrior player Baron Davis, making out, my first and most natural thought was, “go ahead, Laura Dern.” 2017 has been a great year for her. As an actress she was in Big Little Lies and Star Wars, earning a Golden Globe nomination for the former (hopefully an Emmy will follow). Her comedic chops also in full effect during this most recent season of Unbreakable Kimmy Schmit.  With so much going on in her life, I was surprised to see this headline come upwhile I was doing a Google search.

Seriously The Mercury News? That is the headline you’ve chosen to use for this article? Not to mention this section of the article, which follows after the author discusses their career highs. “In fact, they’re showing that actresses 50 and older can exude plenty of glamour, allure, and power both on screen — and off. In terms of off-screen, both women have recently been romantically linked to attractive younger men.”

Exclusive: Laura Dern and Baron Davis packed on the PDA during a lunch date! https://t.co/FGDHtcBfTh

Laura Dern and Robin Wright are attractive as hell, of course men of all ages want to date them. Laura Dern was in Jurassic Park! Right now she is one of the big characters in Star Wars. Robin Wright has been keeping House of Cards interesting for three seasons now and kicked major ass in Wonder Woman, in addition to being an on-screen icon as Princess Buttercup in The Princess Bride. Both of these women are still in their prime career wise and relationship wise.

What irritates me the most is the slight implication that men aren’t into older women and that it is headline worthy for a story. Women date older men all the time. No one questions how men can be still be considered attractive in their 50s. Sean Connery was 59 when he was awarded Sexiest Man Alive in 1989. Nick Nolte, Harrison Ford, Richard Gere…all in their 50s.

But of course, the media constantly shows us film after film with young women in the sexual thrall of older men. When it is the reverse everyone has to make a giant fuss over it. While I’m super excited about the upcoming film Film Stars Don’t Die in Liverpool, starring Annette Bening as Gloria Grahame, my biggest fear is the emphasis that will be put in Bening being sexually attractive to a younger man. First of all, yes, of course she can because sexual attraction is subjective and secondly, it doesn’t freaking matter. Women do not exist just to be lusted after by men. And women do not expire after 45.

The reality is that we should all be so lucky to date Laura Dern or Robin Wright. I know I would be! So I hope they are enjoying the company of these younger gentlemen who better recognize the icons they are dating!