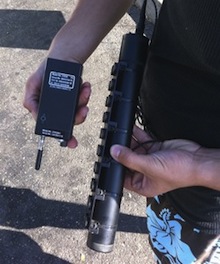 Earlier this week, a Redditor named Khaled posted a picture of a device that he and his friend found under his friend’s car when they took it to the mechanic for an oil change. Khaled’s friend, Yasir Afifi, is a student at Mission College in Santa Clara, California: He’s also the son of a religious Islamic-American leader, Aladdin Afifi, who died last year in Egypt. Khaled asked the Reddit community if the device was a bug or tracking device of some kind, since the FBI had previously tried to contact Afifi, but disappeared when he got a lawyer involved.

As it turns out, it was a bug: Reddit IDed it as “a Guardian ST820. It’s a GPS tracking unit made by the company Cobham.” The story quickly spread through the blogosphere, and within 48 hours, the FBI came to Afifi to pick up their tracking device:

Wired has the scoop:

Afifi considered selling the device on Craigslist before the FBI showed up. He was in his apartment Tuesday afternoon when a roommate told him “two sneaky-looking people” were near his car. Afifi, already heading out for an appointment, encountered a man and woman looking his vehicle outside. The man asked if Afifi knew his registration tag was expired. When Afifi asked if it bothered him, the man just smiled. Afifi got into his car and headed for the parking lot exit when two SUVs pulled up with flashing lights carrying four police officers in bullet-proof vests.

The agent who initially spoke with Afifi identified himself then as Vincent and told Afifi, “We’re here to recover the device you found on your vehicle. It’s federal property. It’s an expensive piece, and we need it right now.”

Afifi asked, “Are you the guys that put it there?” and the agent replied, “Yeah, I put it there.” He told Afifi, “We’re going to make this much more difficult for you if you don’t cooperate.”

Yikes. Moreover, Khaled — the friend who initially posted the picture — now appears to be under investigation thanks to this comment he left on Reddit three months ago about blowing up malls. He wrote that it “seems so easy to do,” but that “if terrorism were actually a legitimate threat, think about how many fucking malls would have blown up already.” How he ended the comment: “so…yea…now i’m surely bugged : /”