Review: Fantasy Life Is a Mind-Numbingly Adorable Escape From Reality

IT'S SO FLUFFY I'M GONNA DIE.

Like the cute, simplistic aesthetic of Animal Crossing but wish it were a little more goal-oriented? Enjoy the wide scope of The Elder Scrolls: Skyrim but wish it were fluffier and just a little bit more manageable? Fantasy Life is the adorable middle ground you’ve been waiting for.

The game is officially set to launch in the United States tomorrow, but has been out in the UK for a couple of weeks (see the above game trailer) and was first released to Japanese audiences around this time last year. It was designed by Level-5 Studios (who did the Professor Layton series and Izunama Eleven) and worked on by Final Fantasy character designer Yoshitaka Amano, as well as Final Fantasy and Kingdom Hearts composer Nobou Uetmatsu. So if you’re a fan of those games, the aesthetic will probably feel very familiar to you.

Oh, also, did I mention how effing cute it is? Because seriously. I think I have cavities in my teeth now that weren’t there when I started playing.

First of all, I cannot say enough good things about the character customization. There’s an incredible wealth of body types, hair colors and styles, skin tones (though a little fewer options for darker shades, unfortunately), facial features, and accessories to put on your lil’ hero. You can even bend the boundaries of your selected gender with stuff like feminine looking eyes and “princess curls” on your male character, or a big bushy mustache or goatee (sadly not both at once) on your female character. All the NPCs will still call you by a fixed set of male or female gender pronouns, and the clothing will still be pretty traditional—more dresses and pastel colors for women—but for people who want a bit more diversity in their character creation, this is definitely up your alley.

I had WAY too much fun with this, in fact. Apologies for low picture quality.

Although you pick one class, or Life, to start with when you first create your character, you’re allowed to switch back and forth as much as you want at the Guild office. Some, like the paladin, are combat-driven; others, like the tailor or cook, involve crafting via button-mashing mini game. Your skills from one Life transfer over into another, and skills from one Life can also help feed into the skills and goals of another. For example, if you need an oak beam to finish a blacksmith task, you can learn how to create one from an oak log by becoming a carpenter, and you can collect oak logs by becoming a woodcutter.

You might get caught up in the fun of learning new skills and become a jack of all trades but master of none, of course. If you ask me, though, that’s kind of the point of the game: it’s much more fun trying to figure out every job at once than it is to just do a single job very well. Then again, I’m one of those weirdos who read Harry Potter and the Prisoner of Azkaban and thought, “Oh man, I have to get me one of those time turners so I can take three classes at once, too.” So maybe it’s just me. I am the jack of all trades. Let me sew you a hat while also baking you a casserole.

But anyway! To get farther along in the game, you have to complete quests, which are divided up into three major categories: there’s the career “challenges” of whatever Life you’ve taken on at the time, the “bliss” goals that are given to you by your talking butterfly companion and which progress the story of the game, and “other” goals, which appear when you take on a quest given to you by an NPC townsperson and are usually redeemable for money. The gameplay is very loose and you basically have free reign to do whatever you want most of the time, though sometimes if you get too deep into a storyline you won’t be able to change Lives until you’re done—though it’s possible to go through the entire story of the game while playing a craft-based class instead of a combat-driven one like the wizard or mercenary, if that’s what you want to do.

Speaking of the story, it’s fairly straightforward for an RPG and not that compelling on its own: the world of Reveria is in danger as foretold by an ancient prophecy, and you (and that butterfly I mentioned earlier, who is not at all what she seems) have to travel around the world to save the day. Where it lacks in originality, though, Fantasy Life makes up for in personality–there are all kinds of goofy jokes and lighthearted fun to be had in the dialogue.

It also feels like the game goes out of its way to celebrate its female characters, many of whom are playable and can be invited into your party at different game levels. Your very first plot-specific friend, in fact is Princess Laura, who spends a good chunk of the game beating up monsters in a ballgown. 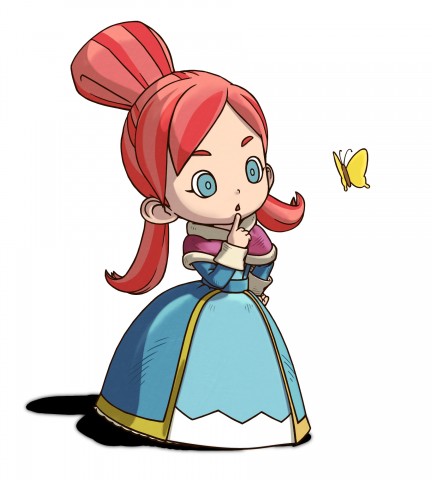 When her father, the king, complains that girls need to be more careful adventuring than boys do, the queen immediately calls him out on all the times she had to rescue him when he went adventuring. It’s basically everything you could ever want.

Surprisingly, the multiplayer aspect is also pretty well done; I was able to meet up with another game reviewer who had an advance copy handy (Janine Hawkins of Paste Magazine) and test this feature out for a few hours. We both got more than a little frustrated with the incredibly tiny keypad that you use to chat with one another—probably it works better if you have some other way to communicate with your friends on hand—but overall, it was very fun for exploring and monster-slaying. Plus, you don’t have to worry about who’s going to get all the loot at the end; it appears to drop for each person in multiplayer separately, from what we could tell. 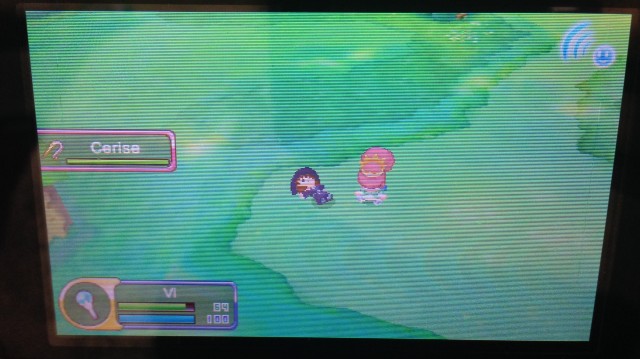 You can also just chill and hang out together.

The game does feel pretty grind heavy at times, however. If you’re not taking down monster after monster as a paladin or hunter, you’re engaging in the same mini-game over and over to create objects for your career challenges. Personally, I’m a big RPG fan and tend to play my 3DS the most on long public transit commutes, so it doesn’t feel as monotonous to me as it might end up being for some other players. As I mentioned before, as adorable and girl-power friendly as the story can be at times, it’s never anything to write home about. It’s fluffy, cute, and exceptionally feel-good, but doesn’t ever hit the same compelling scope as those early Final Fantasy games.

All in all, if you like Animal Crossing and want something simple and relaxing to pass the time, it’s a safe bet that you’ll definitely enjoy Fantasy Life a lot. It’s not going to win any Game of the Year awards for ingenuity, but I’ve been having a lot of fun running around and rescuing napdragons (there’s a NAPDRAGON, guys! How cute is that?). It’s a very good way to relax—something I think most of us really need right about now.