Things We Saw Today: The Fantastic Beasts Twitter Account Sure Is Having a Time Hiding All Those Replies 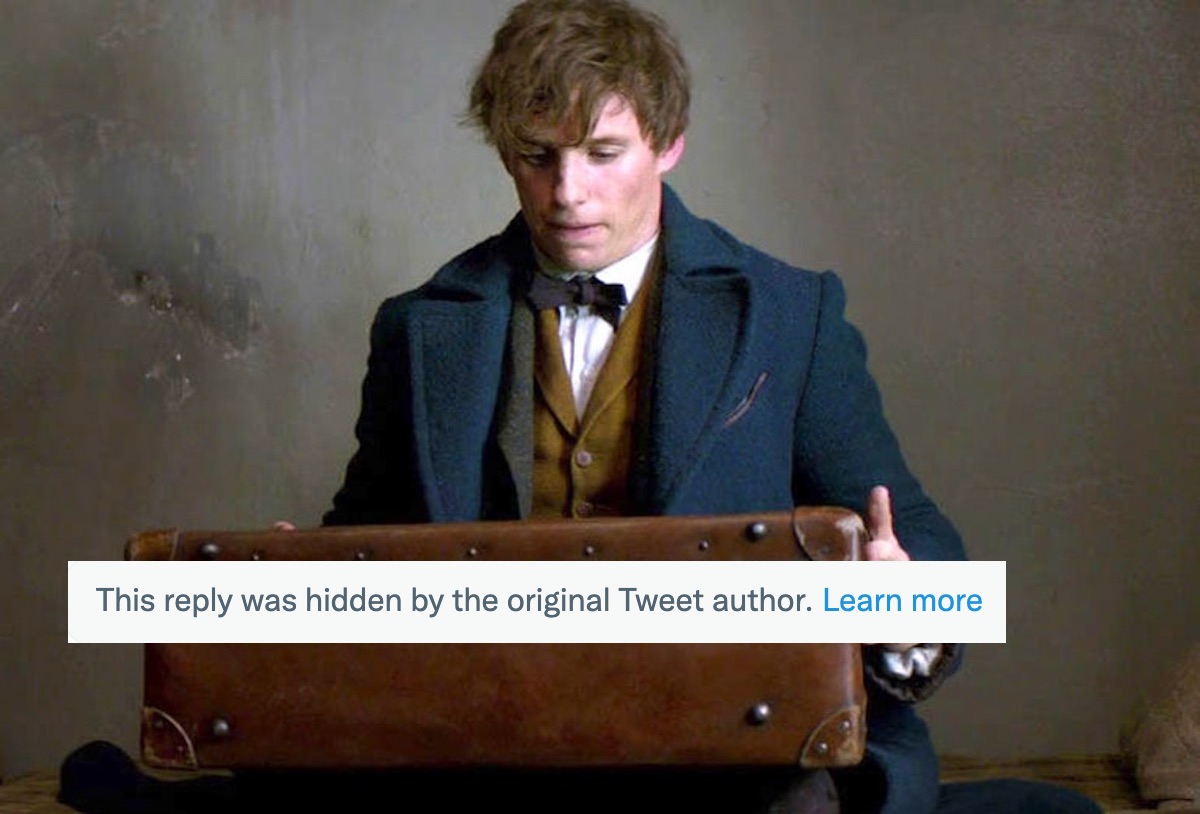 I feel a little bad for the person behind the Twitter account for the Fantastic Beasts film franchise. They likely could not have anticipated the property turning toxic by its association with transphobic author J.K. Rowling or the casting (and then un-casting) of Johnny Depp as Grindelwald. Fantastic Beasts began its life in 2016 as a historical wizarding world romp involving magical creatures and starring Marius from Les Misérables in a bow tie, and for a while, all was well.

These days, however, anything associated with Rowling—who has quintupled down on her now widely-known transphobia—feels cursed. Once-loyal fans have rightfully abandoned her in droves, and the second Beasts movie, which stuck with Johnny Depp despite his very public controversies, was panned as incoherent and overdone. (Rowling wrote the screenplay.) Even Jude Law in a snazzy costume as a young Albus Dumbledore couldn’t save this ungainly creature.

Some actors from the franchise have since denounced Rowling and taken stands for trans rights. But Warner Bros. is sticking to their commitment to the bit and an apparent plan for five whole movies in this universe. And so the third film recently revealed its title: The Secrets of Dumbledore.

This is where I stop feeling bad for the person or persons behind the Beasts Twitter account, because they are currently committing a cardinal Internet marketing sin. The account has been hiding lots of Twitter replies to the movie title announcement. This, of course, invokes the Streisand effect, wherein “an attempt to hide, remove, or censor information has the unintended consequence of increasing awareness of that information.”

Suddenly, everyone’s attention is being drawn to those hidden replies, and more and more people are engaging and producing content in the thread that Beasts/Warner Bros. doesn’t want seen. And by hiding the replies, the account also just makes it easier to view all of that offending content en masse for our viewing pleasure. If this is the reaction to the posting of a title card reveal alone, I cannot even begin to imagine what lies in wait for us as more information and publicity about the movie is rolled out.

The Beasts account has not hidden many critical reactions from what appears to be a legion of Johnny Depp fans incensed that the actor was asked to resign as bad wizard Grindelwald. (Mads Mikkelsen, who deserves better, is taking on the role for the third film.) So while many other replies in the title announcement thread are hidden (and some pro-Depp replies with curse words), there is a viewable raft of content like this.

These movies aren’t worth watching without Johnny Depp pic.twitter.com/0AEqOV6GEn

Now, granted, quite a bit of the written content that was hidden was rather sexual in nature, as people (in this case, hilariously) trolled the movie. Many who are outraged about Rowling’s harmful stances are Extremely Online, and this sort of thing is what they do best. It is a losing game to try and fight it. The title centering around Dumbledore only provoked this reaction further, considering that the character is at this point bound up in how Rowling revealed that he was gay to much fanfare in 2007 (which feels like a century ago) but has done nothing to actually let Dumbledore evidence that.

The fact that this is a hidden reply is criminal, have this as a consolation prize, fam. pic.twitter.com/XC9j7QBJcv

Here is a smattering of some of these NSFW (now hidden) sentiments:

I do not envy their PR team, I’ll tell you that pic.twitter.com/phdrAUS8cA

There are quite a few in this vein! However, some more innocuous replies were also hidden—for example, this legitimate criticism:

Oh god… do I really have to do another one of these? The last one was so fucking bad.

Or this succinct reply telling Rowling “fuck you” in Portuguese.

Or simple riffs on the title.

The secret of deez nuts

If you’re on Twitter, here’s how to see those forbidden replies all in one place:

We await the PR campaign for Fantastic Beasts: The Sexnuts of Dunglefuck with much anticipation.

Here are some other things that weren’t hidden from us today:

Today, we honor our friend Jim Henson, and the legacy of joy, love, and laughter that he shared with the world. ❤️ #JimHensonBirthday pic.twitter.com/zQc7WpYTWD

Happy Friday to all who celebrate!