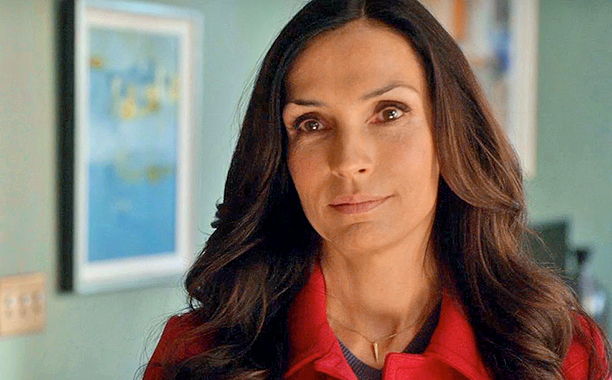 Earlier this week Famke Janssen, who originated the role of Jean Grey in 2000’s X-Men, made an appearance on Entertainment Weekly Radio. During the segment, Janssen talked to the host about her relationship with Sophie Turner,  Jean Grey in X-Men: Apocalypse. Janssen said she and Turner emailed back and forth soon after the latter was cast: “she emailed me before she started filming wanting some pointers. I said, ‘You don’t need any. You’re perfect. You’re great.’ So I can’t wait to see the movie and what she’s done with it.”

When asked by the host if it’s strange to watch someone else take on the role she played for years, Janssen said she’s very excited to see Turner in the part, although she does feel there’s a possible double standard in the new X-Men films:

I’m actually really excited about it. And its not the first time obviously that it’s happened. In the X-Men series, they’ve been doing this for years. Although women, it’s interesting because they’re replaced, and the older versions – or more mature, whatever the politically correct version of that is – are never to be seen again. Whereas the men are allowed to be both ages. Sexism. I think that I should be back along with my younger version and the way that we’ve seen it with Magneto and Professor X.

Janssen even says she pitched the idea of having an older iteration of Jean Grey return alongside Sophie Turner’s portrayal, but “I have not heard any feedback on that, other than total radio silence.”

Sexist ageism is unbelievably pervasive in Hollywood, so Janssen’s probably correct that, were she a man, her chances of returning to the franchise at age 51 would be higher than they are now. It’s worth noting that Alan Cumming, Ben Foster, and James Marsden also aren’t known to appear in X-Men: Apocalypse, so it’s not just women who haven’t been invited back, although Janssen’s point seems to be more that there isn’t a female equivalent to Magneto or Xavier in this film. This might be a less clear-cut case of gendered ageism than, for example, that time Olivia Wilde was told she’s too ancient to play DiCaprio’s wife, but given what a unique relationship the X-Men franchise has to time and aging overall, I agree with Janssen that it would be exciting to see these movies in particular be a little more welcoming to ‘mature’ women.

What do you think about her comments?