Does this mean I can be a shameless SamBucky shipper again? We might still be mourning the not-so-permanent deaths—despite what Marvel Studios President Kevin Feige keeps trying to convince us—and dustings in Avengers: Infinity War, but we can’t help but get roped back into (potentially) more suffering now, after Variety reported that a Falcon-Winter Soldier limited series is underway. Although the twosome hasn’t had much screen time together, we kind of hope that the series will explore Sam and Bucky’s relationship—and yes, that includes making their headcanon ship canon.

Captain America-affiliated comic titles may have unabashedly delved into the Nat and Bucky ship (which I’m also into, to be honest), but the Falcon-Winter Soldier TV series could reimagine the Sam/Bucky relationship in ways the comics never did. They might have been inseparable and even reliant on each other times in the comics, but they were “just friends” (most of the time).

Seeing as Kevin Feige told The Playlist several months ago that the MCU will introduce more than one openly LGBTQ+ character in the foreseeable future, it’s obvious that the MCU is finally interested in including LGBTQ+ representation, and writing Sam and Bucky into a healthy relationship isn’t exactly out of the question. The MCU versions of the characters might have a long way to go before they go on a legitimate date, but the comic book iterations have already fostered some of the most important pillars of a healthy relationship: respect, support, trust and communication. 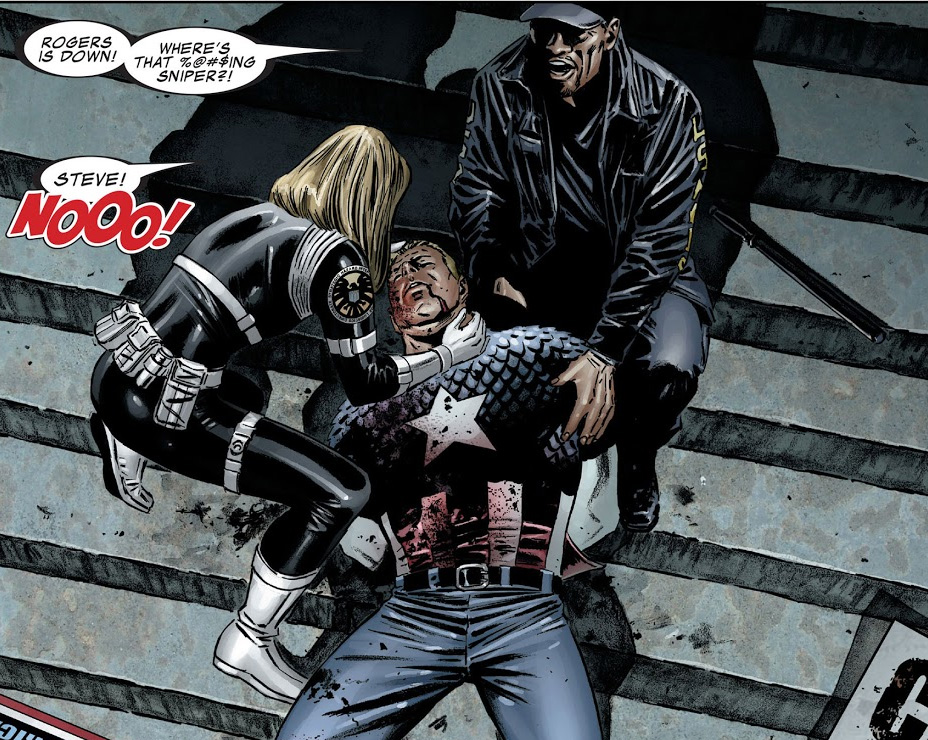 Immediately after his bestie died and he started wielding the iconic shield, Bucky went after Crossbones and Hydra, but in the process, he used these self-provoked fights as an unhealthy coping mechanism. In a way, he became addicted to seeking out vengeance. Fortunately, none other than Sam Wilson acted as an anchor for him, and either stopped him from seeking out certain fights or fought side-by-side with him to make sure his anger didn’t overcome him.

Sam also helped Bucky focus on himself and gain confidence by reminding him that he might be Captain America, but that doesn’t mean he has to be Steve. Marvel Comics naturally painted this as a friendly companionship as Sam helped him recover and find himself, beyond all the non-sexual masochism disguised as rage and fighting.

Sam doesn’t just try to help Bucky work through his grief to keep him from harming civilians or keep the Captain America symbol intact. He cares about Bucky and his feelings, including his emotions and fears outside of his guilt. Bucky is canonically afraid of heights, and Sam knows this. When Sam needs to swoop in and save Bucky from falling, he even comforts him while he’s in mid-air (while he tells him to close his mouth and shut his eyes, obviously).

On the MCU side, given all the ominous clues from Avengers: Infinity War and the post-IW rumors and press, sacrifice is going to be inevitable, if not essential for the Avengers and company to defeat Thanos in Avengers 4. Since Steve is likely to go full-blown self-sacrificing Steve in the upcoming sequel, Bucky will likely need some of that same emotional support from a friend, as will Sam.

Like in the comics, where Sam overtly helps Bucky grieve, and Bucky, likewise, acts as a distraction from Sam’s own grief, their reported TV series is likely to focus on that kind of relationship, romantic or not. After all, Kevin Feige mentioned that the Marvel shows on the Disney+ streaming service will be an opportunity to tell more in-depth character-focused stories, as well as more comic-accurate narratives, The Hollywood Reporter notes.

Given Marvel’s projected desire to not only be comic accurate, but also focus on healthy LGBTQ+ representation, bringing in Sam and Bucky’s relationship on more than just a friendly level will give the series a chance to fill the gaps in their LGBTQ+ coded comics. Although it hasn’t been made official canon, Black Widow (2016) writer Mark Waid has suggested that Bucky is bi+ in the comics. According to Marvel, Waid said, “[Both Natasha and Bucky] have had a crush on Steve Rogers at some point in the past,” which suggests that, despite a lack of confirmation of his sexuality, Bucky isn’t straight, at the very least.

According to the CDC’s 2016 study on gay and bisexual men’s health, only 2% of men identify as bi. This number might seem shockingly low, maybe even inaccurately so, and that’s because it is. Bi men face an overwhelming about of discrimination and invalidation because of their sexuality, and this is partly because of misinformation about bisexuality itself and stigma surrounding bi men in particular. Bringing in a bi male character would be extremely helpful in tearing that stigma down, but all kinds of LGBTQ+ representation could use a boost.

According to GLAAD’s annual report on LGBTQ inclusion in television from 2017 to 2018, LGBTQ+ characters only made up 6.4% of the 901 characters in broadcast TV, and the statistics for overall representation for streaming services and cable aren’t much better. Not only that, but 77% of these LGBTQ+ characters are white, which means current representation still isn’t inclusive.

Shows like Black Lightning have created healthy sapphic representation with the first televised lesbian superhero, Anissa Pierce (Thunder, played by Nafessa Williams), and its increasing list of LGBTQ+ main characters. However, other shows need to follow Black Lightning’s example and showcase heroes beyond just white LGBTQ+ characters, and Sam and Bucky could fill that need.

If Disney finally realizes that shows that feature and star LGBTQ+ characters are highly successful and often have more viewership, like with Black Lightning, Modern Family, Brooklyn Nine-Nine, and so many other shows, then the Falcon-Winter Solider series can finally give us some clarity on the should-be couple’s individual sexuality.

Sure, Sam and Bucky have a long way to go before they even shift from frenemies to “just” friends, but they’re already on their way, even with the minimal screen time they’ve had together in the MCU. When they aren’t bickering about proper vehicle seat positions, they do at least care about each other’s wellbeing. After all, Bucky did jump in front of Sam in Captain America: Civil War in an attempt to save him, when Spider-Man swung at him.

We might not know much about this rumored Falcon-Winter Soldier series, but we do know that Sam should wield the Captain America shield if Steve does meet Lady Death in Avengers 4 because, well, Bucky just isn’t ready. (Plus, we all know that Sam Wilson is more than qualified to be the next Cap.)

Beyond that, we know these two will continue to develop their relationship with each other, in whatever context that might be, and I hope they’ll become more than just friends. Now that Disney has officially confirmed the untitled Loki series, we just hope that they’ll confirm the Falcon-Winter Soldier series soon.