Facebook Whistleblower Reveals Her Identity, Breaks Down How the Platform Pushes Hate for Profit 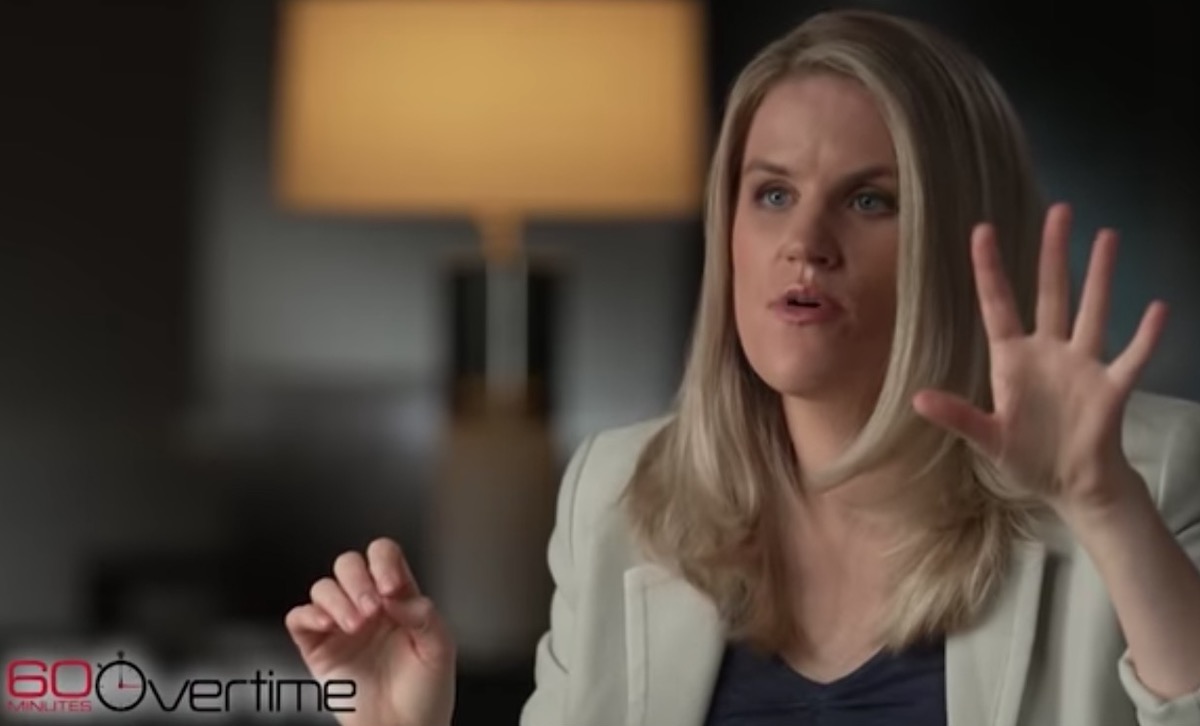 The Facebook whistleblower whose leaked documents resulted in a series of Wall Street Journal exposés, as well as a recent Senate hearing, has revealed her identity.

Frances Haugen was a product manager working on Facebook’s civic misinformation team until finally leaving in May of this year, taking a trove of internal documents with her. In an interview with 60 Minutes Sunday, Haugen explained that the policies she saw in place at Facebook were so disturbing, she felt they needed to be publicly exposed.

As Haugen explains it, Facebook’s algorithms are antithetical to its own purported mission. The company says that its mission is to “connect people.” In reality, it thrives on creating division and stoking anger. Anger is Facebook’s number one driving force.

Political parties and other publishers have noticed—and told Facebook they’ve noticed and stated their displeasure—that as the platform changes its algorithms, the only way for these publishers to engage with their audience is through posts designed to evoke anger. When they post non-anger-based content, it simply isn’t distributed to their followers and there’s no engagement. So those publishers have to post “angry, hateful, polarizing, divisive content” because it’s the only way to get audiences to see that content and generate revenue. And because people are engaging, the hateful content is profitable for Facebook as well.

Basically, Facebook has turned rage into its #1 export as well as its top internal moneymaker.

“I’ve seen a bunch of social networks and it was substantially worse at Facebook than what I had seen before,” Haugen said in her 60 Minutes interview. “Facebook, over and over again, has shown it chooses profit over safety.”

In the days prior to Haugen’s interview, Facebook appears to have attempted some damage control. It sent out a memo to employees (which was obtained by the New York Times) pushing back on what Haugen was expected to say and calling her presumed accusations “misleading.”

“Social media has had a big impact on society in recent years, and Facebook is often a place where much of this debate plays out,” the memo reads. “But what evidence there is simply does not support the idea that Facebook, or social media more generally, is the primary cause of polarization.”

The memo adds that “The increase in political polarization in the US pre-dates social media by several decades.”

Obviously, this is true. Facebook didn’t invent political polarization. But it definitely fuels it, as well as feeds on it. Facebook and political rage have a symbiotic, parasitic relationship and it hurts all of us. And once again, Facebook knows the damage it’s causing.

Haugen tells 60 Minutes’ Scott Pelley about experiments Facebook has done that show just how strong its hate pipeline is. Haugen says the company did a test where it created brand new profiles and only followed a handful of accounts: Donald Trump, Melania Trump, Fox News, and a local news source. The account has no actual friends to influence what they’re seeing and they only clicked on the first 10 or so things Facebook showed them, and joined the groups suggested by Facebook.

“They’re not doing any conscious action here,” Haugen says, “and within a week, you see QAnon; in two weeks you see things about ‘white genocide.'” These are the things Facebook is choosing to show to its users because they’re the things with the highest engagement—it’s not an accident that this is what Facebook pushes to its users, it’s the entire point.

“When we live in an information environment that is full of angry, hateful, polarizing content, it erodes our civic trust, it erodes our faith in each other, it erodes our ability to want to care for each other,” Haugen said. “The version of Facebook that exists today is tearing our societies apart and causing ethnic violence around the world.”

Haugen will testify before a Senate committee Tuesday as part of the ongoing examination of Facebook’s harmful practices and the way they specifically affect young people.