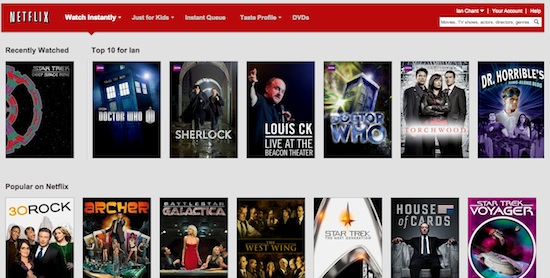 Look, we all have a guilty pleasure show or two on Netflix.  A show that we love dearly, but don’t bring up around company, because come on, really? I like to hope my friends and relatives would be shocked to find out how many episodes of I Shouldn’t Be Alive or Quanutm Leap I have binge watched, for example. God knows I’m surprised by it. But pretty soon, no one will be surprised by any piece of shameful television you put in your Instant Watch queue. That’s because by the end of the week, Netflix is going to be set to tattle on your viewing to your Facebook friends, leaving you with a lot of uncomfortable questions to answer about why you gave a 5 star rating to Say Yes To The Dress.

When the new service launches later this week, Netflix will be set by default to share your watching habits with your friends, and theirs with you, so at least you’ll have something to hold over their heads. The new ‘Watched by your friends’ and ‘Friends Favorites’ rows will mean mutually assured destruction — or at least mutually assured catty bickering about which of your bad habits is worse — among your friends and relatives.

Thankfully, if you don’t feel like sharing facts like ‘Ian has put away four full seasons of Star Trek: Deep Space Nine in the last month’ with everyone you know, the settings are pretty easy to change, allowing you to not share a particular show. Alternately, you can come totally clean and share your TV watching habits via Facebook itself, or swing back the other way and disable sharing altogether.  While that might seem like the easiest option, be careful. If you’re too conspicuously absent from your friends’ feeds, they may start to think the worst. After all, it’s not like you’re hiding the fact that you’re watching House of Cards. (You are watching House of Cards, aren’t you? It’s amazing.)

Of course, there are other methods you can try. Just repeat after me: “Oh, my roommate must have watched that.” Good. Now practice it about a billion times while catching up on Auction Wars.