Facebook Now Gives You Gender Options Besides “Male” and “Female” 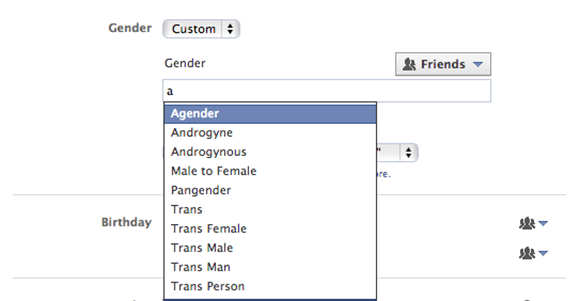 Starting today, Facebook has about 50 different terms that one can use to identify one’s gender. And they’re also upping their pronoun game. Are these… positive feelings I’m having toward Facebook right now? I’m not used to this. What’s happening?

Gender isn’t just a matter of “male” or “female.” But you wouldn’t know it from visiting all the websites on the great, vast internet that ask you to choose one or the other when creating an account. Sometimes they let you choose “I’d prefer not to answer this question” or “other,” but that’s not the same thing as giving, for example, genderfluid or transgender individuals the option of identifying themselves as their actual, specific gender.

Starting today, however, Facebook is giving users that option, widening their array of genders far beyond the simple male/female. If you already have an account, all you need to do is click “update info” and then edit your “basic information.” Choose “custom” from the dropdown box and start typing. Agender is there, as is non-binary, trans, trans woman, trans man, trans person… over 50 options in all. Further, you can now select select him, her, or they as your preferred pronoun, which gets used when Facebook reminds people that it’s your birthday.

This may not seem like a bit deal to some, but Masen Davis of the Transgender Law Center warns us not to dismiss how important something like this is for transgender individuals, saying “we applaud Facebook for making it possible for people to be their authentic selves online.”

That sentiment is echoed by Brielle Harrison, a Facebook software engineer who worked on the project. She’s also undergoing gender transformation, and today changed her gender status on Facebook from female to transwoman. “There’s going to be a lot of people for whom this is going to mean nothing, but for the few it does impact, it means the world,” she says. “All too often transgender people like myself and other gender nonconforming people are given this binary option, do you want to be male or female? What is your gender? And it’s kind of disheartening because none of those let us tell others who we really are. This really changes that, and for the first time I get to go to the site and specify to all the people I know what my gender is.”