Did the Great Facebook Deactivation Wave of 2010 Just Kick Off?

Just as many threatened to burn their U.S. passports and move to Canada if George W. Bush won the 2004 presidential election, but few followed through when he did, so has been the anti-Facebook backlash: Though every successive wave of privacy-eroding, profit-maximizing innovations prompts lots of threats to quit, deactivate, and delete, not very many people cling to principle at the cost of losing the well-established network of their friends. And there’s a weird social cache to being tech-savvy and Doctorovian enough to be, like, pissed off about it: As reporter David Montgomery recently wrote on Twitter, “Complaining about Facebook privacy has joined fixed-gear bikes and ironic facial hair as a hipster trademark.”

But this afternoon, about as noteworthy a tech media figure as you can find — Peter Rojas, the founding editor of Gizmodo, Engadget, and gdgt — announced on Twitter that he was deactivating his Facebook account, prompting a flurry of retweets, baffled replies, and shows of support. Moments later, investor and Infectious Greed writer Paul Kedrosky did the same. Is the great wave of Facebook deactivation, prompted by the ruthless march towards unhideable social metadata inherent in the recently unveiled Facebook Open graph, upon us?

According to Rojas, he deactivated his account for three reasons: 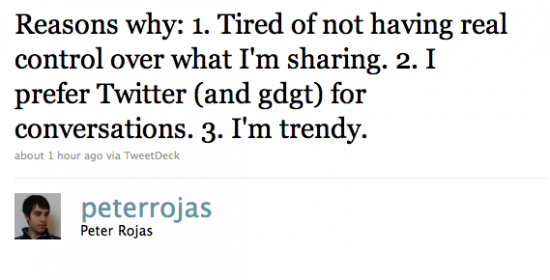 Of course, not everyone runs a tech site — and more importantly for Facebook, “trendy” in Peter Rojas-speak is a very different thing from “trendy” in heartland momspeak. But on the flipside of that is Ph.D. student Drew Conway’s response to Kedrosky’s announced Facebook deactivation:

The Facebook deactivation backlash isn’t entirely a function of the elites: For what it’s worth, the Google search volume for the phrase “deactivate Facebook” has more than tripled since last year, and there’s great enough search volume that Google’s tracking it in the first place. (“Deactivate Plurk,” sadly, hasn’t yet hit critical mass.) 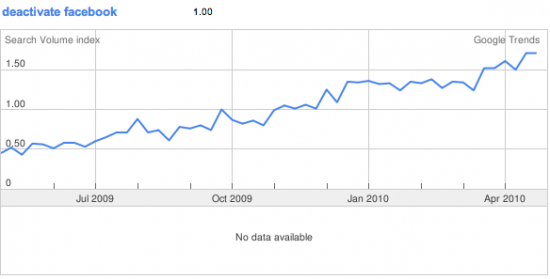 Let’s be honest here: In the short term, Facebook continues to grow at a healthy rate, and outside of high geekdom, there probably aren’t enough people who know who Peter Rojas is or want to ‘poke’ him. But high-profile deactivations like his and Kedrosky’s could well have a vanguard effect — not necessarily on the rank-and-file, but on the would-be quitters with their fixies and ironic facial hair, who might feel compelled to actually do something. That, in turn, could provoke further quittings in their circles.

Would this chain reaction take down Facebook? Of course not. But it could hobble it. Facebook is too big now for everyone to feasibly leave, but it could still present a headache if all of the cool kids start to leave, especially as press coverage of Facebook — even in the midst of hyperinflated pronouncements about its size and value — continues to get more negative and skeptical on the fronts of user experience and privacy.