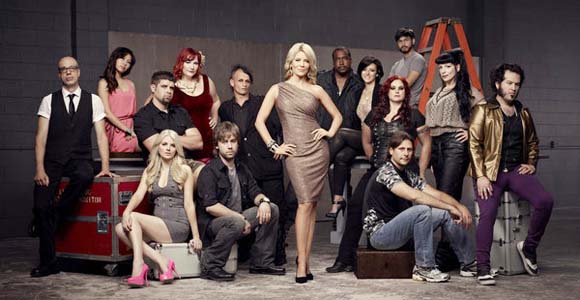 Syfy’s Face Off is one of my favorite shows. I’ve always been interested in movie makeup but didn’t have the skill to make it a career plus, the show isn’t overly dramatized like most reality TV these days. They premiered the fourth season last night and while I’ve yet to watch the episode, we’ve just found out some people we’re very familiar with will be making a guest appearance in a few weeks – employees of DC Comics. Find out if your favorite creator will be giving their artistic input to the contestants after the cut.

On the January 22 episode, DC Co-Publishers Dan DiDio and Jim Lee will make their Face Off debut in an episode filmed during San Diego Comic-Con 2012. The contestants are normally given a theme from which to work off of and as you have probably guessed by now, they will have to create their own superheroes.

But the fun doesn’t stop there. Each contestant is paired up with an actual DC artist to give input on the designs and they chose a great group of folks.

The winner of the challenge will get their character featured in Justice League Dark #16, in stores January 30. It will be interesting to see how much each of the artists’ personal style is reflected in the makeup and overall look. Very excited for this.