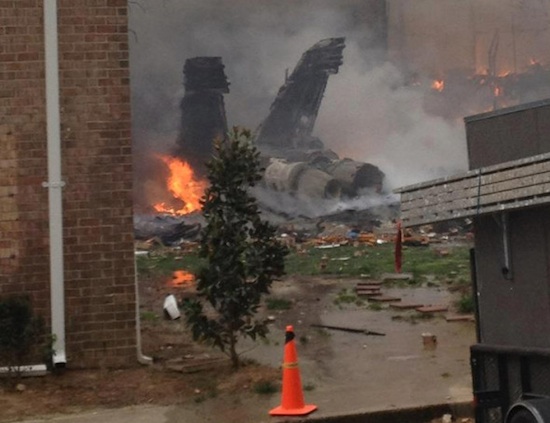 At about 12:05 P.M., a Navy F/A-18D fighter jet attached to the Strike Fighter Squadron (VFA) 106 crashed into an apartment building in Virginia Beach, VA.  There are no reported deaths, and the Navy has confirmed that both members of the jet’s aircrew ejected safely. However, the damage to the building seems extensive. See video, after the break.

This afternoon, the Navy issued the following statement:

Initial reports indicate that at approximately 12:05 p.m., the jet crashed just after takeoff at a location just off of the base.

Both aircrew safely ejected from the aircraft.

VFA-106 is based at Naval Air Station Oceana, and serves as the East Coast Fleet Replacement Squadron. Their mission is to train Navy and Marine Corps F/A-18 Replacement Pilots and Weapon Systems Officers (WSOs) to support fleet commitments.

The Navy is coordinating with local authorities.

Eyewitnesses are saying that the jet was clearly in trouble prior to crashing a half-mile from the ocean. From WVEC:

A witness told 13News he saw the jet flying low, then heard lound pop, pop, pop sounds and then heard the crash. […] Many others say they saw what appeared to be fuel being dumped before the plane went down.

The current belief by most commentators is that the jet experienced some kind of catastrophic malfunction just after takeoff. The aircrew is believed to have attempted to ditch the aircraft over water, where it was far less likely to do any damage. However, it appears that the pilots were not successful and were forced to eject just short of the ocean. Both ejector seats were found in yards nearby.

Developed in the late 1970s and introduced to the armed forces in the early 1980s, the F-18 was originally developed for the U.S. Navy and Marines. Given the training-focused mission of the VFA-106, its likely that this was the training configuration of the two-seated “D” variant aircraft.