Exclusive: The Venture Bros. S6 Is Out on Blu-ray Today, And We Have An Exclusive Clip to Share! 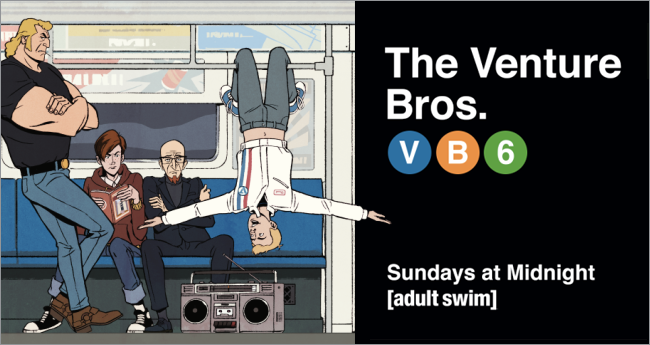 The Venture Bros., like Sherlock, is one of those shows that we love when it’s here, but have to wait way too long between installments. The wait for Season Six was seemingly endless, but now, it’s out on Blu-ray today so that you can enjoy the Ventures’ adventures in your very own home! To celebrate, Cartoon Network has provided us with an exclusive clip from the special features.

First, here is the official description of the new Blu-ray from Cartoon Network:

The Venture Bros. Season Six – available October 4, 2016 (Blu-ray™ and DVD)
Features all eight episodes from the show’s sixth season and bonus material, including commentaries for every episode, deleted scenes and special All This And Gargantua-2, all of which have never been released on Blu-ray™/DVD before.

Finally being able to have the All This And Gargantua-2 special to own is pretty sweet, as is the old-school artwork on the interior of the Blu-ray packaging. The hour of special features on the disc is pretty standard, but there are some cool deleted scenes, made even cooler by the fact that you get to see some of the animation in progress to see how loose pencil sketches become the animated characters we know and love. Check out this exclusive clip from the Venture Bros. deleted scenes: