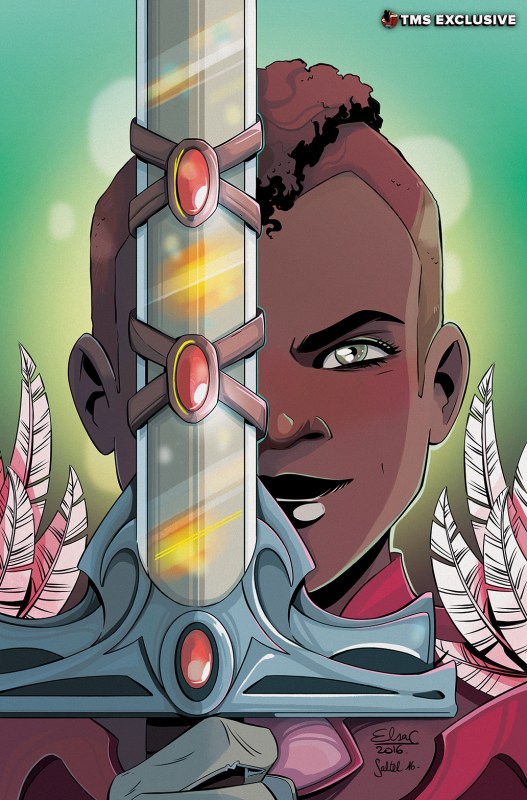 Back in 2015, Gen Con’s “Writing Women Friendly Comics,” moderated by Bill Willingham, almost didn’t have any women on it–that is, until people alerted them to the error of their ways. Gen Con remedied the situation, and panelist Gene Ha along with the convention’s writing track organizer went about the business of inviting female comics creators. One of them was writer Delilah S. Dawson, who went on to school everyone on the importance of female voices in telling stories about female characters.

She was so amped by the situation and the conversation that the kernel of a female-led adventure story began to take root and wouldn’t let go. Now, that story is a comic that’s set to be released by BOOM! Studios later this month! It’s a four-part fantasy series called Ladycastle. Here’s the official solicit information from BOOM!:

Synopsis:
Novelist Delilah S. Dawson (Star Wars: The Perfect Weapon, As Wicked as She Wants, Wake of Vultures) brings her first original series to comics, and is joined by breakthrough illustrator Ashley A. Woods (Niobe: She Is Life) for a rollicking fantasy adventure featuring women reclaiming their lives on their terms.

When King Mancastle and his mighty vassals ride off on crusade, the women left behind are not at all put out—that’s a lot less armor polishing for them to do. Of course, when the men get themselves eaten by a dragon and leave a curse that attracts monsters to the castle…well, the women take umbrage with that.

Now the blacksmith’s wife Merinor is King, Princess Aeve is the Captain, and the only remaining (and least capable) knight Sir Riddick is tasked with teaching the ladies of the castle how to fight, defend, build, and do all manner of noisy things the men had been doing while the women assumed they were just drunk.

Both the story and the art seem awesome, and I can’t wait to get my hands on this book! You can check out an exclusive five-page preview, as well as some additional variant covers, in the gallery below.

I’d totally approve if this were every woman’s response to everything. Facing inequality? Create a female-led story. Drown them in female-led stories. Tell ever more stories to remind men (and ourselves) that we are powerful, numerous, and a force to be reckoned with. Our stories and our voices matter, and it’s important that we support each other when we use those voices and tell those stories.

You’ll be able to find Ladycastle #1 at your favorite local comics shop on January 25th!