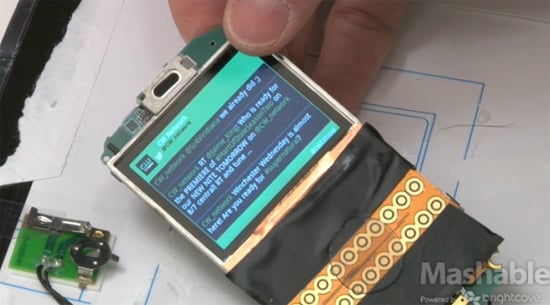 What our magazines clearly need are more odd stunts that splice the technology of today with the archaic print model. That’s obviously what Entertainment Weekly thought when they embedded a functional smartphone into their October 5th issue. The magazine includes an ad that shows live tweets from the @CW_network Twitter as well as clips of two shows from the network, The Arrow and Emily Owens, M.D. Turns out this digital tomfoolery required the base mechanics of an Android smartphone.

In order to figure out exactly what was going on under the hood, Mashable took the thing apart. Christina Warren, Senior Tech Analyst for Mashable, and Lance Ulanoff, Editor-in-Chief, did all the dirty work of picking the page apart and fiddling with the underlying technology. What they found is actually kind of surprising.

Wedged between the two card stock pages was the basic foundation for a smartphone. One might assume that a screen and some connectivity would be all EW would need to accomplish what they wanted, but it looks like they got more than they might have expected. Though some bits are in Chinese, and it doesn’t have the keypad keys, the guts inside are what amounts to a functional ABO Android smartphone with its very own T-Mobile 3G card.

They found that they could take pictures, but without a lens it was just a blurry disaster. They even managed to make a phone call with the bits and pieces. There are supposedly only 1,000 of these out in the wild — 999 now, I guess — but a free phone is a free phone.