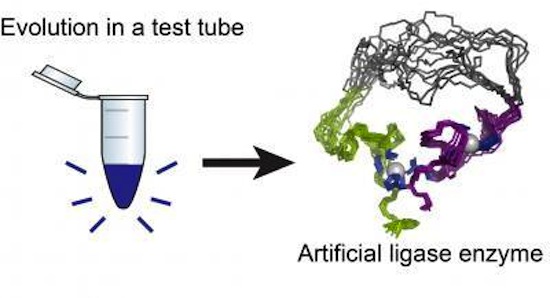 A lab at the University of Minnesota is home to a newly created artificial enzyme that could offer researchers new insights into the origins of life on Earth. That’s because rather than being assembled by researchers one step at a time, this enzyme was created in a test tube by directed evolution. The result is a loosely shaped enzyme that may resemble the collections of molecules in the primordial soup that preceded life on the planet.

Creating artificial enzymes is by no means unheard of, but most researchers working in the field start out with a plan for what an enzyme should look like. Instead of taking this planned approach, the Minnesota team’s work instead starts with a goal for enzyme function in mind. They introduce a lot of different shapes of enzymes, and, using techniques inspired by evolution and natural selection.

The researchers started with a protein that didn’t have any enzyme functions, then made copies of it with randomly introduced mutations. They screened the resulting copies for things like enzyme function that would bring them closer to the qualities they wanted. Promising mutations made it to the next round of tests, while less promising ones were weeded out. Lead researcher Burckhard Seelig makes this comparison:

“It’s kind of like giving typewriters to monkeys. One monkey and one typewriter won’t produce anything clever. But if you have enough monkeys and typewriters, eventually one of them will write ‘to be or not to be’.”

After a few generations, the process left them with a never-before-seen artificial enzyme with the traits they were looking for — in this case, the ability to bind two disparate strands of RNA together.

Now, new research on the structure of the enzyme created by their work has reveled that it has a rather unique structure. Rather than being built of helices and strands like the proteins and enzymes we know and love, the enzyme has a loose structure that winds around a set of metal ions, suggesting that there could be more to enzyme structures than we currently understand — and more ways to build them than we suspected.