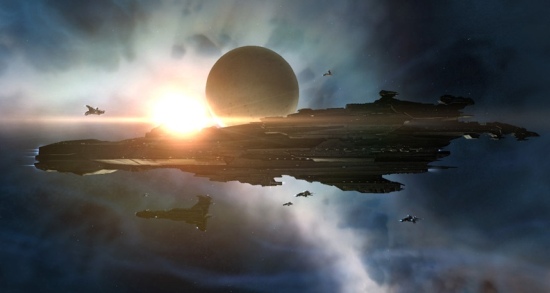 There have been many effects of Eve Online‘s decision to deal a large blow to the black market for their in-game currency by essentially making it purchasable for real money.  The one that we like the most, however, is that it is now really easy to quantify actions in Eve Online to people who don’t play the game.  Case in point:

In-game business machinations have lead to a player known as Bad Bobby walking away from a gutted in-game corporation with items worth $45,000.  And it was all game legal.

The plan was to set up an in-game business that turned a profit by selling copies of blueprints for Titan class starships.  90% of the profits would go to the shareholders who had bankrolled the founding of the company in the first place.  The location of the originals would be kept secret, but their ownership would be controlled by five trustees, ensuring that they could not be taken without all trustees in agreement.  Bad Bobby was a founding member of the company, Titans4U, and one of the trustees.

All of this security hinged on the fact that Bobby would not have access to over 50% of the company’s shares and so couldn’t vote to unlock the blueprints on his own. For over a year, this system worked amicably. In the background, however, Bobby was slowly scheming to get his hands on more shares.

To complete the scam, Bobby initiated a vote to create more shares under the guise of adding more trustees… the vote passed and more shares were created.

The other trustees presumably expected Bobby to hand over the shares when the new trustees were appointed. Instead, Bobby, with access to 50% of the shares, called for a vote to place the blueprints in his ownership at a time when only three of the other four trustees could log on to veto his request, stealing the blueprints.

According to Massively, the virtual goods were worth 850 billion Interstellar Kredits, which can be translated into a value of $45,000 US dollars, which can purchase 214 years of game time.

And yes, Eve Online is at heart an economic simulator as well as a space tactics simulator.  The game’s curators permit in-game thievery, smuggling, elaborate cons, pirates, market manipulation, bounty-hunting, corporate espionage, and racketeering; they simply warn their players to be aware of the risks and careful with their in-game possessions.  Bobby’s actions were all within the rules of the game.  The only thing he has sacrificed is his in-game reputation.