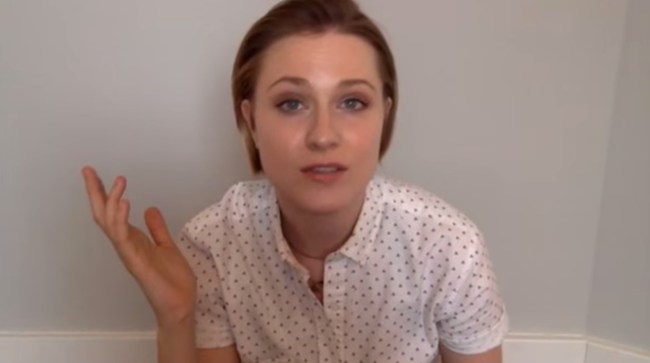 In a candid interview with Motto, Evan Rachel Wood discussed working with Ellen Page in Into the Forest, the importance of sharing stories in the LGBT community, biphobia, pay disparity, and representation.

Earlier this year, the actress critiqued the media’s rampant biphobia in responses to Amber Heard on Twitter. Wood elaborates on the coverage in this interview, calling it “bullshit” and “unfair.” The actress, who recently made a video for Pride month about bisexuality, myths, and statistics, said that being vocal helped her overcome the shame she felt and that her video has been met with “kind and understanding” responses.

Erasure is causing people harm and diminishing self-esteem and putting people in harm’s way. It’s a real need. I want people to know that it’s ok, [bisexuality] is valid, and their stories matter.

Wood also spoke in support of female-driven movies and entertainment that “[sees] women as people.” She also adds that the differences she’s seen in salaries between her and male actors is “staggering.” Wood recounts one specific incident:

There’s me working consistently since I was three or five years old, and I work hard, and yet they weren’t going to give me top billing because I wasn’t a man. I’ve had to start turning down roles because they won’t pay me enough. It’s funny because the people who don’t believe me are usually men and I’m like, “What would you know about it?!”

I definitely recommend reading the full interview at Motto and checking out Wood’s “Pride Month” video.