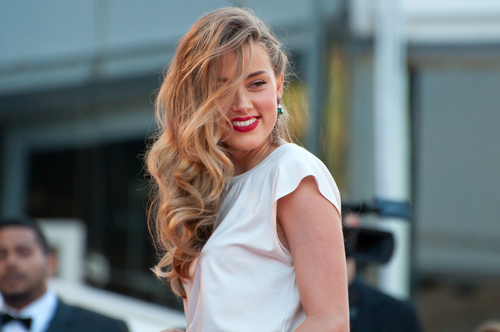 Last week, Amber Heard filed for divorce from Johnny Depp. On Friday, the news broke that Heard had also filed a restraining order against her soon-to-be-ex-husband, alleging domestic abuse. Outlets like The Daily Mail and The Sun wasted no time reporting on the case, and Heard’s allegations also received play in mainstream media outlets that don’t always focus so intensely on celebrity news.

So far, coverage of the divorce and domestic abuse charges has been pretty predictable, in that it’s been omnipresent and hyper-critical of aspects of Amber Heard’s life that are totally immaterial to the abuse allegations (why was she ‘pictured smiling’ hours after being allegedly attacked by Depp?! Because she’s a human who contains multitudes, fuck off!).

What’s been surprising to me is the incredible amount of biphobia demonstrated by the media’s coverage of this case. Given that it’s 2016, I hoped we wouldn’t see outlets framing Heard as inherently duplicitous simply because she’s bisexual, but I guess that was way optimistic of me.

Over the weekend, Hollywood Life wondered if “Amber Heard’s Lesbian Friends” were responsible for putting the marriage on the rocks, stating “Amber Heard, 30, has never shied away from her bisexuality, and it may have doomed her marriage to Johnny Depp, 52, from the start.” The Sun proclaimed “Bye Bi, Amber,” reporting “Johnny Depp ‘driven insane’ over fears his wife had cheated on him with supermodel Cara Delevingne.” Countless publications ran a quote from an unnamed source citing Heard’s “bisexual tendencies” as the reason behind the breakup, and another asked if “Depp’s bisexual wife” was preparing to “take him for £35M.” Out women like Cara Delevingne, iO Tillet Wright, and Tasya van Ree were also specifically named by several outlets as contributing factors in the break up.

Peter Ford of Australia’s Channel 7 The Morning Show was even more explicit in his condemnation of Heard’s sexuality, saying in a segment discussing how the allegations might impact the opening-weekend box office for Depp’s film Alice Through the Looking Glass, “I probably shouldn’t say this, I’ll probably get in trouble, but…it’s not wise to marry a bisexual. This is what Johnny Depp has done here, with Amber Heard, and she was in a very legally committed relationship, a marriage, a legal marriage, to another woman when Johnny came along, and she decided to travel across to the other side.”

The biphobia demonstrated in multiple publications over the past few days is inexcusable, regardless of what transpired in this specific marriage.

Of course, if Heard wasn’t bi or out, we’d probably still see media speculation that she was having an affair. But since she’s been relatively open about her orientation, the assumption, driven by quotes from an “unnamed source,” seems to be that her marriage to Depp was doomed because she wanted to go back to women. That, for me, cuts to one of the most frustrating aspects of bisexuality: as a bi woman, I feel I’m always seen as actually gay, or a liar, or both. When I’m with a man, I’m perceived as having chosen men, and when I’m with a woman, I’ve switched teams. I wish more publications, in discussing Heard, would remember that bisexuality doesn’t inherently connote promiscuity, and that it’s possible to be bisexual and be in a happily monogamous relationship.

Bisexuals are often perceived as duplicitous, untrustworthy, and indecisive (or as Cross put it, quick to “travel across to the other side”). Not only is that perception untrue, it’s also dangerous. A nationwide study on domestic violence and sexual orientation released in 2013 found that 61.1% of bisexual women had experienced rape, physical violence, or stalking by a partner. 89.5% of bisexual participants who reported that behavior said they had only experienced that abuse from male partners. The study didn’t examine why bisexual participants reported such high rates of violence, but it’s not too far a leap to assume that some of the prevailing misconceptions of bisexuals (that, as Cross put it, we’re not a “wise” choice for a serious partner) might partially contribute.

Given that, I hope we see more of the media taking Cross’ tack and amending how they discuss bisexuality. That doesn’t mean Heard’s orientation shouldn’t be mentioned at all, of course. But bisexuality shouldn’t be used to imply that Heard is inherently less trustworthy than a straight woman, nor should it be used an excuse for Depp’s alleged violence.