The European Union Bans Fun: Kids Younger Than Eight Not Allowed to Blow Up Balloons 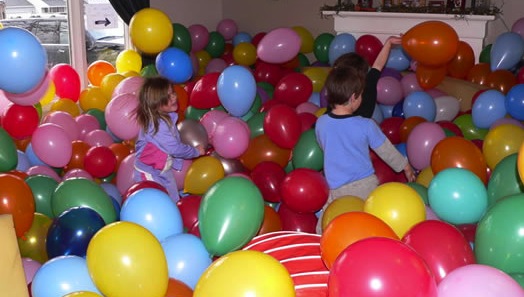 In a new safety directive issued by the European Union, children under the age of eight are not allowed to blow up balloons without adult supervision. Because they might choke on them. I say that if you have a child who thinks that balloons are blown up by placing said balloon completely inside the mouth and then inhaling, then the child is not the person we need to worry about.

Predictably, many are decrying these new guidelines — which also ban party blowers for everyone under 14 as well as those magnetic fishing games — as the government turning harmless playtime into a “danger zone,” and that it stifles an environment that encourages children to learn new skills and become more self-reliant. But sure enough, toy stores will not be able to sell these products unless they comply with the new legislation, including a requirement to print warnings on the packages. According to The Telegraph, there will also be legislation to “impose restrictions on how noisy toys, including rattles or musical instruments, are allowed to be.” Have we also mentioned that teddy bears designed for children under the age of three will have to be washable? Because of the risk of disease. (Back when I was a kid in the Dark Non-Germophobic Ages of the 1980s, this was how we strengthened our developing immune systems. That, and the mere act of “going to kindergarten” and “being forced to play with the kid who just got the chicken pox.” For the record, I am currently alive.)

Is this overkill? We at The Mary Sue are not anti-safety. But we are anti-ridiculous, as is Paul Nuttall, a member of the European Parliament’s consumer safety committee. Says the MEP:

“I would say that this is crackers but [I’m] sure children are banned from using them too. EU party poopers should not be telling families how to blow up balloons.”

Seriously, what kind of parents don’t supervise their children around small, mouth-insertable things already? Even an EU spokesperson says that children have been blowing up balloons for generations, but guess what? “[N]ot anymore and they will be safer for it.” Nuttall really put it best when he called the EU “kill joys.”

There’s no denying that the EU’s heart is in the right place. Children do die from choking on small playthings. But this is usually the result of a fleeting lapse in judgement or a freak accident. It’s not the norm. And while such an experience is, as the EU puts it, “every parent’s worst nightmare” and a “horror story,” the government trying to legislate parental minutiae is certainly overreaching. But overreaching isn’t the only issue at hand if tons of new regulations are put on toys:

British toy manufacturers are concerned that the new rules, which include defining colouring books and anything played with by under-14s, could drive up the price of Christmas presents because of the cost of safety tests.

If there’s anything parents dislike even more than being told how to be a good parents, it’s paying more for children’s toys during the holidays. They already have to face mass riots, after all.

(The Telegraph via Jezebel)