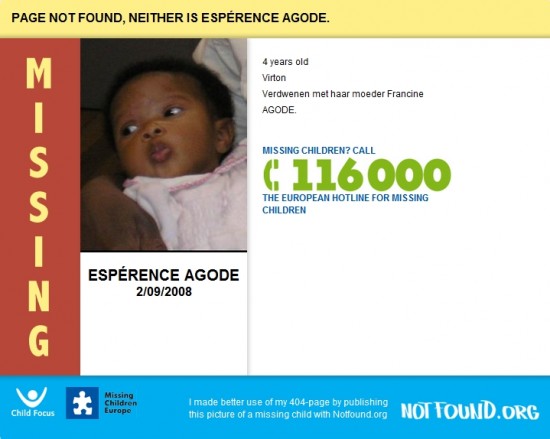 The majority of 404 error pages are not only boring, but pretty disappointing. Every site on the Internet can’t be The Rolling Stones’s 404 page, so normally we Internet patrons have to suffer through a blank error, and the frustration of not being able to access whatever content we were looking for. However, a European initiative is attempting to turn 404 pages into something not only thematic, but pretty helpful.

Rather than a blank page with an error message, the NotFound project aims to turn 404 pages into what is stereotypically seen on the back of milk cartons — missing persons bulletins. Various Internet properties, from service providers to media companies, have joined the project and agreed to display the bulletins rather than a bland error message. At the moment, the NotFound project only seems to focus on European nations, as the initiative is a joint venture between Missing Children Europe, and European Federation for Missing and Sexually Exploited Children, to name a couple.

Maryse Roland, a spokeswoman for one of the agencies involved in the project, said that the initiative decided a random selection would be best for choosing which missing child is shown per 404 page. So, the child shown could either be a recent matter, or that of a matter years old, bringing the case back to the forefront.

The process of participating in the project is easy enough: Simply venture on over to the initiative’s site,  sign up, and then add a snippet of provided code to your own site, and there you go. Now your site’s 404 page will display images and information regarding missing children, and you can sleep a little easier at night knowing that when your site is returning errors, you’re possibly helping a missing child. If you don’t run a website, there’s also an option provided that automatically sends an email to someone you know that does, filled with information regarding the NotFound project.

So far, 480 sites have joined the cause, and hopefully the initiative can find its way to other countries sometime in the near future.