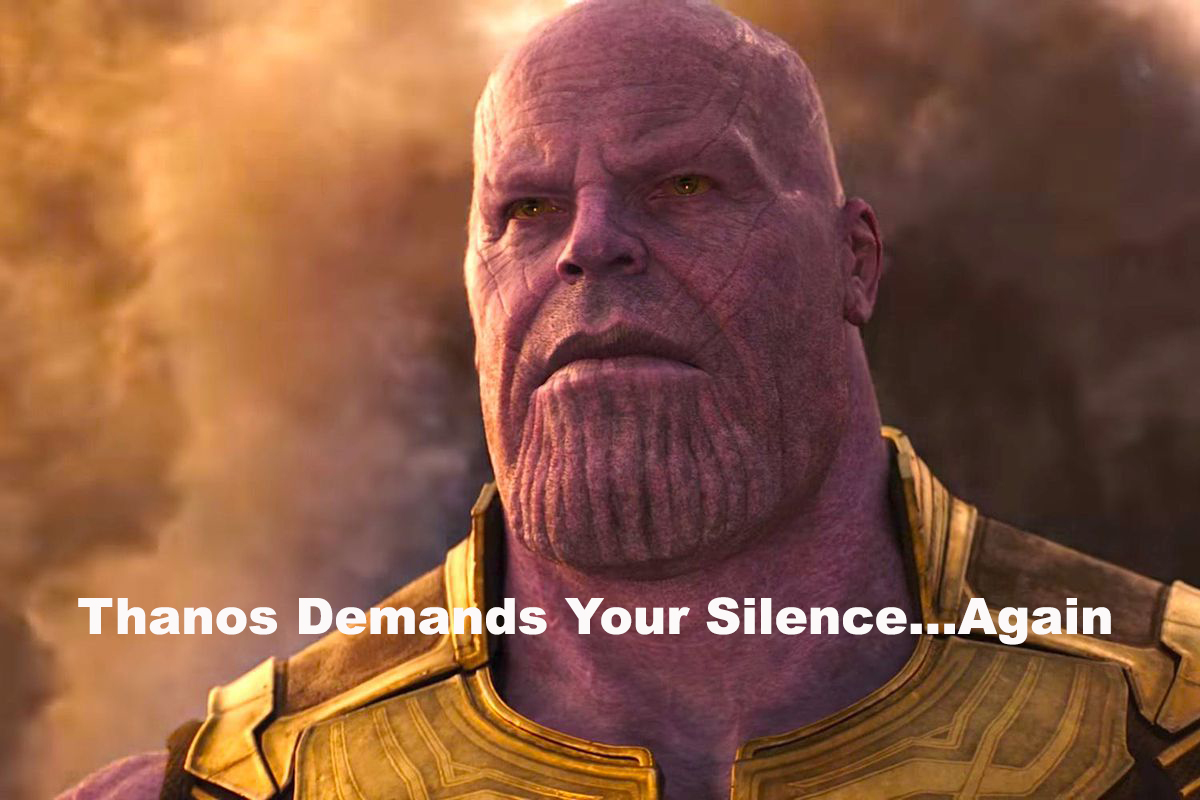 ***Needless to say, a spoiler for Eternals and the MCU lies ahead!***

Spoilers are inevitable in our society; some might even say that we exist in a spoiler society. There’s a feeding frenzy around every tidbit or exciting twist that emerges for popular movies and TV shows, and people can’t seem to help but talk about them on social media and in the press.

Once, we could get away with going into a movie without knowing everything—back when we lived in the dark age and didn’t have Twitter broadcasting our every thought into the world. It’s almost inevitable that if you’re plugged into social media, you’re going to see some leaks and spoils. But there has also been an unspoken rule for a while that big, game-changing spoilers really get about a week of grace—and that week usually starts after the actual release date—before we all start talking about the movies and shows that we love and giving away major plot-points or surprise reveals without warning.

Here at The Mary Sue, we workshop headlines to make sure no spoilers are revealed too soon, and when we’re invited to see a movie well in advance, we know not to give too much away before others have had the chance to see it. We know we’re not always perfect—everyone’s idea of a “spoiler” can be different. Some viewers and readers want to remain totally in the dark, some don’t mind getting spoiled as it might up their anticipation, and some people love spoilers and search them out. All of this is fine, but we still think giant spoilers and fun secrets should at very least be hidden behind a headline, so that you have the choice to click through or not.

Yesterday, a critic who went to the Los Angeles premiere of Eternals for Variety went on Twitter and shared a casting that was not revealed prior that shows up in one of the end credit scenes. You know, the end credit scenes that New York City critics were not privy to as they screened Eternals earlier Monday afternoon for the NYC press and took them out of that screening. That may have even been to further limit the spread of this particular spoiler.

But then a critic for arguably the biggest Hollywood industry-news outlet came out of his screening, one that had more information than what the NYC press got, and decided to drop a major “scoop” on Twitter of the casting, despite the movie not being released until November 5th, and other critics not seeing that part of the film.

Since then, it has been picked up by major outlets—many, many of which are putting the casting spoiler directly in the headline, no warnings or vague wording at all—and now the spoiler is literally everywhere. I thought I could avoid it by not being on Twitter, but I saw it in a random TikTok video and another Mary Sue editor, despite literally staying off of Twitter so as to not be spoiled, saw it in multiple headlines when she went to Google News.

**Casting spoilers for Eternals lie below if you’ve managed to avoid it, stop reading now**

Right after the Los Angeles premiere, like … at 1 AM in the morning ET, the critic took to Twitter to share a huge casting for the Marvel Cinematic Universe. This casting was rumored potentially months ago, but nothing was confirmed, and nothing was announced prior to the release of Eternals. Again, I want to reiterate, NYC press was not privy to this information that the critic shared, which is the first issue I have with this.

I’ve screenshot the tweet because the critic was getting death threats which is another massive online problem, because while the critic in question should not have launched this as his Eternals take, it has now spun into three separate issues all rolled into one. We can be upset about spoilers, but no one should be receiving death threats for tweeting about a film.

Personally, I was upset because working in this industry means that I rarely get to be excited about things like this because I’m aware of the casting choices and am immersed in them every day. Yet somehow I missed the rumor, I missed the whispers that one of my favorite singers was even in the running to be in the MCU. I would have screamed at my press screening next week and excitedly waited until everyone knew to share the news. I would have been thrilled to have gone into Eternals unaware. Now? Now I had it ruined because it seems like we are constantly racing to be the first to tweet out a “big reveal.” For clout? For likes? For follows? I honestly can’t wrap my head around why this spoiler in particular seemed like the thing to share post-movie.

Maybe this critic didn’t realize how much this sort of spoiler would mean to people and thought it’d be huge, uncontainable news. But the thing with Marvel movies is that nearly all of the end credit scenes have “big reveals” and we somehow don’t turn around and spoil that so this feels a little more personal gain-based to me. Another problem with this situation is that the tweet seemed to prompt tons of outlets to post the news in headlines and sharing it, so even if you wanted to avoid the spoiler, you were confronted with it in some way or another.

It’s as though where everyone would have once tread much more carefully and with spoiler-aware caution, people plugged into Twitter (this tends to be a lot of entertainment reporters and editors!) thought the cat was out of the bag and why shouldn’t they get in on that rush to traffic for the headline news?

In fact, today, this is on my Twitter trending news sidebar:

I thought much like the spoiler for Venom: Let There Be Carnage that started to go around, I could avoid this. Foolish of me. It is everywhere and all because social media seems to have become a breeding ground and echo chamber for this sort of thing. While formal reviews of Eternals are embargoed until next week, the social media embargo lifted post-premiere. Usually, this consists of critics and fans who got to see the movie sharing very carefully worded impressions and reactions—not “big reveals.” It makes me wonder if we’ll see the policies around social media embargoes shift in the future.

The problem isn’t just that we were spoiled and we’re mad about that, however. A much larger problem, and one that quickly arose in conversation on Twitter, is rooted in the fact that this particular critic works for an industry publication and will most likely see no consequences for what he did. We’d like to point out that if smaller outlets—especially those focused on women and people of color—were to tweet a reveal like that, we’re pretty sure we’d never be invited back to a Disney press screening again or we could see a trickle-down change that would not affect someone like Variety but could hurt freelancers or smaller outlets because of these sort of spoilers.

Dark Sky Lady put it best in a thread on Twitter, sharing that the “embargo” language that is seemingly making this “okay” isn’t the core issue here but rather that if another critic did this, say from a smaller outlet or a critic who wasn’t white and/or male, that critic would likely not be welcomed back to screenings/premieres.

Embargo breaking ain’t the issue. Lack of accountability, wrapped up in white supremacy & outlet hierarchy is. If another did that shit they’d get banned. You send the message that folks can do what they want as long as their white then feign horror when they take you up on it.

We fight for our places at these screenings, to get these interviews, and to be the ones to report on movies and television shows. For me, at least, it comes from a place of love so I don’t want to spoil audiences. It’s why I work so hard to hide the story from the headline or put multiple warnings. I don’t want people to be angry that I ruined something for them.

So to think that this news wasn’t a major spoiler or that it wasn’t a huge deal? It shows a lack of understanding of not only the fanbase surrounding the MCU but also how these movies play into our cultural landscape. And the fact that this spoiler is now unavoidable (I ALSO saw a sponsored tweet from Rolling Stone magazine, which I do not follow, on my Timeline this morning so I would have been spoiled regardless) is something that shouldn’t have happened in the first place.

Anyway, the PRESIDENT of Marketing for Disney should not have to tweet this to reporters:

To our colleagues & friends in the press & fan community who will be watching #Eternals in the days ahead, please help preserve the experience of this incredible film. Please do not post spoilers and reveals that so many have worked so hard to protect pic.twitter.com/97elpmQVDY

I’m so excited that my boy, my sweet prince (as I’ve named him), Harry Styles is going to be in the MCU. I’ve proudly been his fan for the last eleven years. Sadly, I’ll have to now just watch the end credit scene knowing what it is going to reveal instead of getting that joy as the surprise Marvel intended, all because folks wanted to have the scoop that other critics were not even privy to since it is such a big deal.

I can’t begin to tell you how privileged and unprofessional it is to tweet a massive spoiler when you were invited to a premiere or early screening. This movie is for fans. And hundreds of people worked on it to make it surprising and special.
I hope Disney uninvites you pic.twitter.com/wKmSWPZufo