The Boys Showrunner Eric Kripke on Superheroes and Fascism 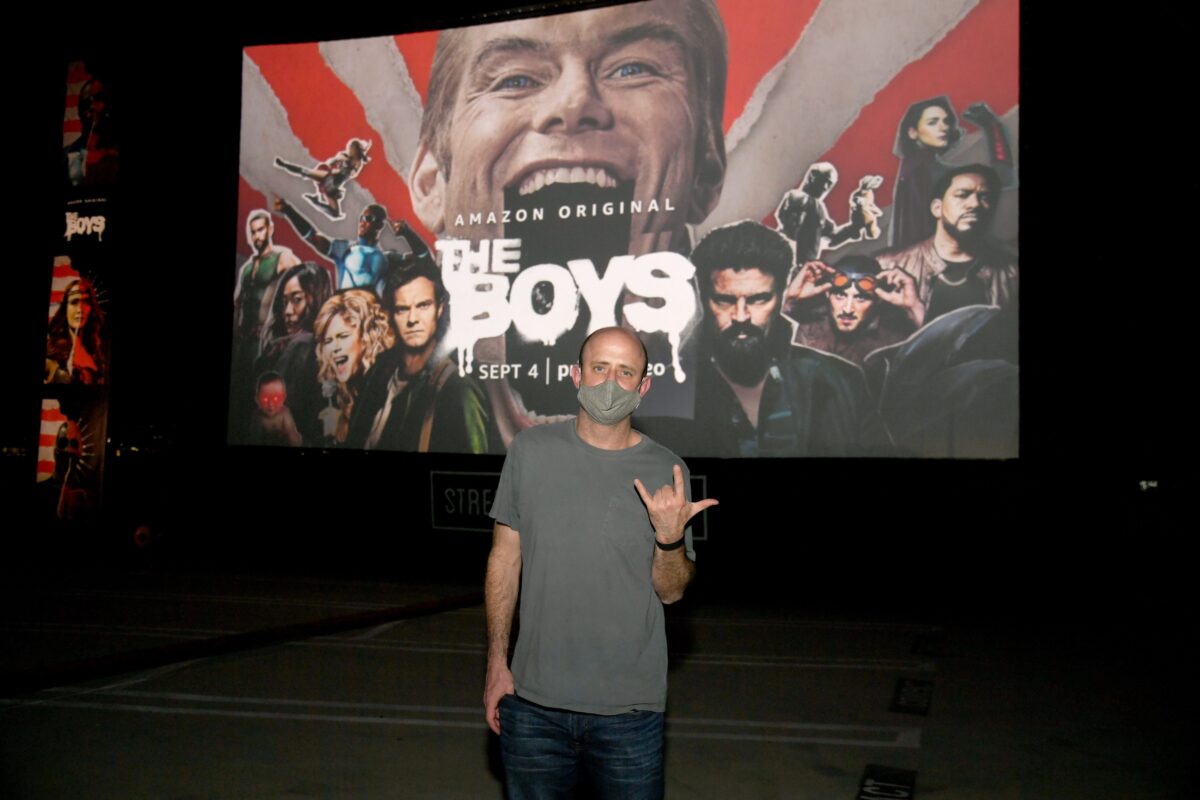 If you’re a television fan and a consummate nerd, chances are you’ve watched at least one of Eric Kripke’s shows. The creator of beloved genre series like Supernatural, Timeless, and Revolution is currently showrunning Amazon’s The Boys, a wildly profane and violent take on superheroes gone bad and the regular Joes trying to rein them in.

In a new interview with The Hollywood Reporter, Kripke discusses the development of Stormfront (Aya Cash) as an antagonist, and how our current political landscape plays into tired superhero tropes.

Kripke touches on how the fascist superheroes of The Boys coincide with the rise of fascism in our country saying, “We write a lot about what frankly frustrates us. We’re living in the world’s dumbest dystopia — and we happen to have lucked into a show that is the perfect metaphor for this exact moment.”

The myth of superheroes themselves — though often created by young Jewish writers in the ’30s and ’40s — doesn’t really apply as cleanly today, because there’s these undeniable fascist underpinnings to it. They’re there to protect white, patriotic America. That’s what they were designed to do, that’s what they do. They’re protecting the status quo. When the status quo is problematic, suddenly they become adversarial — not your hero. And I think it was written by a lot of people who at that time were trying their level best to fit in and vanish within white, American society.

“But we just don’t live in that time anymore. So the myth of the superhero taken straight, that’s where it starts to become fascist. Because they’re protecting a world that doesn’t and shouldn’t exist. Superheroes are inherently MAGA. In terms of Stormfront, there was nothing specifically personal behind it. It was just, I hate Nazis. I hate alt-right white nationalism. I hate racism in all of its forms.”

Kripke makes a strong point, one that is often glossed over in mainstream superhero content. After all, “truth, justice, and the American way” is about as pro-establishment a slogan as one can get. And what happens when the people in charge, the ones tasked with leading us, are deceitful, unjust, and beholden to foreign powers?

Marvel has touched on this theme in the MCU, most notably in Captain America: Winter Soldier and Captain America: Civil War. But the franchise is unwilling to villainize or tear down their own heroes. After all, these are family films, and the point is to make palatable entertainment for the masses.

Kripke is a fan of the MCU, but questions the relentless superhero-fication of pop culture, saying:

“I sort of believe it’s dangerous, not to overstate it or be overdramatic, but it’s a little dangerous to train an entire generation to wait for someone strong to come in and save you. That’s I think how you end up with people like Trump and populists who say, ‘I’m the only one who can come in, it’s going to be me.’ And I think in the way that pop-culture conditions people subtly, I think it’s conditioning them the wrong way — because there’s just too much of it. So I think it’s nice to have a corrective, at least a small one in us, to say, ‘They’re not coming to save you. Hold your family together and save yourselves.'”

He also pokes fun at the MCU’s all-female hero moment in Avengers: Endgame with the in-show “Girls Get It Done” ad campaign promoting the female heroines of Vought. It was a moment that was celebrated by some, but criticized for excessive pandering by others.

Kripke said, “As for ‘girls get it done,’ a lot of that came from our executive producer, Rebecca Sonneshine, who came in after the weekend Endgame opened. She was just furious. I saw it, too, and I was like, ‘That was the dumbest, most contrived—’ And she’s like, ‘Don’t get me started.’ She found it condescending and I agreed. So that just created for us a target, a satirical target. When there’s something really ridiculous in either superhero or celebrity or Hollywood culture, we’ll immediately go after it. It’s an easy shot.”

The Boys is currently streaming on Amazon Prime Video.