The Klingon Christmas Carol Makes It to Chicago 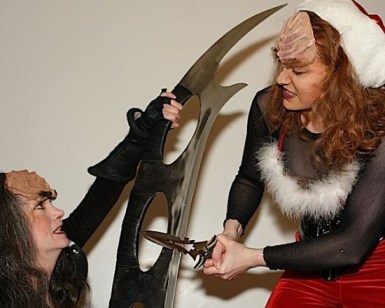 It’s a Christmas miracle! “A Klingon Christmas Carol,” a live production of the classic Charles Dickens tale performed entirely in Klingon, has made it to Chicago!

In a March post, we covered the fundraising efforts by Minnesota-based theatre troupe Commedia Beauregard to bring its tlhIngan Hol production, “A Klingon Christmas Carol,” to Chicago in time for Christmas. While it looks like their Kickstarter campaign came up a little short, they clearly found the funds and support to achieve their goals.

Performed in “the Original Klingon,” the story revolved around SCuja (Scrooge) who is visited by the requisite three spirits who help him realize that he is, indeed, a worthy Klingon warrior. Tiny Tim is portrayed as a puppet, and since the Klingons have “killed their gods,” according to creator Christopher Kidder, spirituality doesn’t play quite as large a role as in the traditional telling.

The Trekkie involvement goes as far as the creator of the Original Klingon, Marc Okrand, as well as the input of hardcore Klingon linguists and IKV RakeHell of the Klingon Assault Group. It is said to resemble a combination of “Victorian England and a Marilyn Manson video,” and, apparently, “makes no sense as a play.” But when you have the spirit of a dedicated theatre troupe plus all those devoted Trekkies, does it have to? Of course not. It’s Christmas, it’s Klingon, it’s more than likely a blast.