Embrace the Listlessness with Ennuigi, Featuring Luigi Riddled with Ennui

"You wear a shell. I have become one." 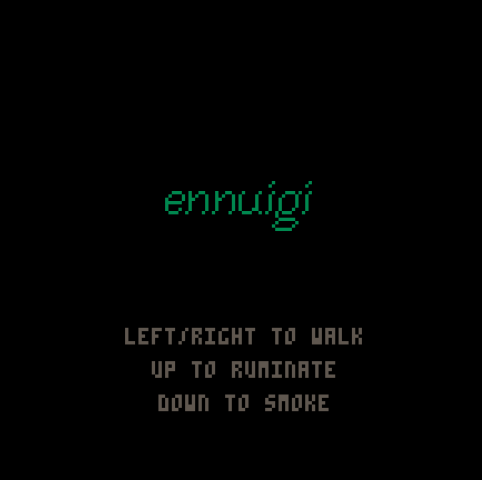 Poor Luigi. The Year of Luigi is over, Mario is still overshadowing his accomplishments, and he’s still single. I think. Don’t quote me on that last part. But it’s more depressing to see that Luigi has fully embraced his ennui and dubbed himself Ennuigi in this hilarious parody titled (what else?) Ennuigi, by Josh Millard.

The slow, plodding, aimless music reflects Ennuigi’s growing boredom and distaste for life’s everyday trials and tribulations. You take control of Ennuigi who has three simple abilities. There’s the slow, inexorable march towards nothingness, he can ruminate on the mundanities of Mario World (why does that egotistical man name everything after himself?!), and lastly, he can take some fleeting pleasure in the cigarette he holds in his hand.

As he ruminates, some great ennui-studded gems float through the sky. For example: “I look at a turtle, I think I have done you one better; You wear a shell. I have become one.”

Here’s your shot to become one with your ennui. Dive in and embrace the listlessness.

life hits you hardLuigismokingSuper Mario Bros. (franchise)there must be more to life than this