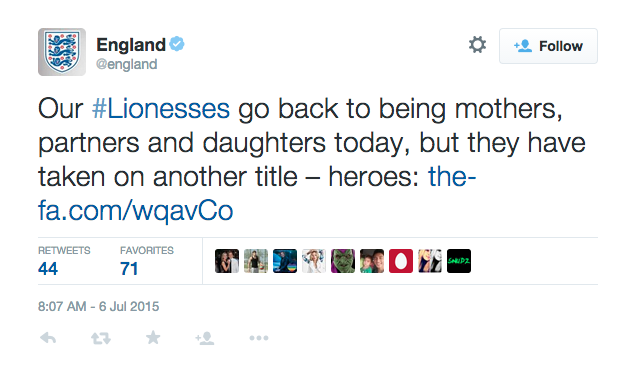 Just in case you weren’t keeping up with the Women’s World Cup, here’s a tiny bit of background. England finished in third behind second place Japan and first place (woo!) USA. When the England/Japan game was over, the England Football Association’s official Twitter account shared the fairly condescending (now deleted) tweet above.

Just in case you weren’t miffed enough, check out this handy dandy graphic showing some staggering pay gap action on the US side. The US Men’s team were paid four times more than the Women’s team when they lost the World Cup in the first round.

If you weren’t angry enough. Here’s this: pic.twitter.com/BQtAbSBB3P

UPDATE: The head of the English Football Association, Martin Glenn, insists that the tweet was “taken out of context.” According to Business Insider, he doubled down on this defense, saying:

They were all desperate to get back to, you know, their homes and families  — they had been in hotel beds for the last couple of weeks — and the tweet of that summary, 140 characters, says … basically, the girls can’t wait to get back to being mum. That was perceived as being sexist.

To his credit, he recognizes the stodgy old image that the Football Association is dealing with. “When you think FA, you think of an old man, reactionary, [wearing a] blue blazer,” Glenn explains. “The FA has been a reactionary organization… so you’re conditioned to cut no slack [when it makes a mistake].”

Who’s really misunderstanding who here, though?