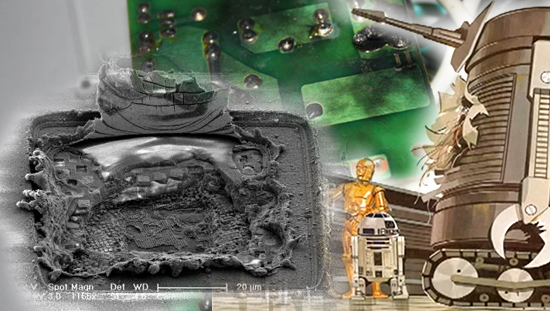 Robots need us, because we’re the only ones who can fix them when they break. Even when the machines do rise against us, they’re sure to keep at least a few of us around. Or maybe not. Engineers at the California Institute of Technology (Caltech) have created self-healing computer chips, so our machines will likely one day be able to repair themselves. Thus rendering us obsolete. What are you playing at, Caltech?

The Division of Engineering and Applied Science is behind this ingenious, harebrained scheme, which they’ve published in Transactions on Microwave Theory and Techniques. The team constructed minuscule power amplifiers — and I do mean tiny, 76 of the chips could fit on a penny — and deliberately damaged various parts of them with high-powered lasers. Then they presumably blinked, looked back, and found less than a second later that the chips had developed work-arounds already.

“It was incredible the first time the system kicked in and healed itself. It felt like we were witnessing the next step in the evolution of integrated circuits. We had literally just blasted half the amplifier and vaporized many of its components, such as transistors, and it was able to recover to nearly its ideal performance.”

Previously, even the slightest fault in an integrated-circuit chip made it useless. But the engineers designed these power amplifiers with a cluster of on-chip sensors that monitor the condition of the larger circuit, including temperature, voltage, power, and current. The information thus collected goes into an “application-specific integrated-circuit” (ASIC) unit on that same chip, which acts as a brain to adjust the system actuators.

Regarding said brain, Steven Bowers, author of actual paper and a grad student in the lab, said:

“You tell the chip the results you want and let it figure out how to produce those results. The challenge is that there are more than 100,000 transistors on each chip. We don’t know all of the different things that might go wrong, and we don’t need to. We have designed the system in a general enough way that it finds the optimum state for all of the actuators in any situation without external intervention.”

In other words, we give them the ability to fix themselves and even let them work out how to do it. It’s a slippery slope, Caltech, but we’re still looking forward to the end product. Maybe this means, someday, when you drop your smartphone in the toilet, you can just fish it out, dry it off, and just wait for it to be all better.