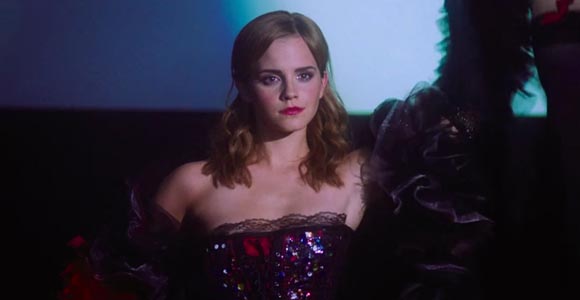 Emma Watson is well known for her role of Hermione Granger in the Harry Potter series but the young actress is set to take on a role in another book adaptation soon. She’s playing Sam in Stephen Chbosky’s The Perks of Being a Wallflower, and not only does she have to do an American accent in the film, she had to perform a dance routine from The Rocky Horror Picture Show.

Oddly enough, The Perks of Being a Wallflower has Watson starring alongside a pair of young men, just like she’s being doing for the last ten years in the Potter universe. And although she plays a much different character here, she thinks fans following her from her years at Hogwarts will enjoy it.

“I think Harry Potter fans will love it because it has so much heart, like the Harry Potter stories do,” Watson told E! at the MTV Movie Awards. “I feel like it’s the perfect transition from Harry Potter to kind of a more adolescent movie. It’s a little bit of an older tone. It’s darker.”

The novel was Chbosky’s first and published by MTV in 1999. The story follows a shy high school freshman named Charlie (Logan Lerman) who befriends a senior named Sam (Watson) and her stepbrother Patrick (Ezra Miller).

In the film, the characters perform in The Rocky Horror Picture Show and Watson had to perform in some skimpy lingerie. “I was very nervous to that stuff,” she said. “It was tough.”

But perhaps even tougher was trying to nail an American accent. “I really wanted to get that right,” Watson said. “But Logan and Ezra were very instructive. If I ever said anything that sounded weird, they were like, ‘That’s not right!’ and we would fix it.”

The Perks of Being a Wallflower hits theaters September 14, and Watson is currently filming Sofia Coppola’s The Bling Ring, inspired by the true story of teenagers who tracked celebrities via the internet in order to rob their homes.

Check out the trailer for Wallflower: