A proposal that would melt the heart of every pony. 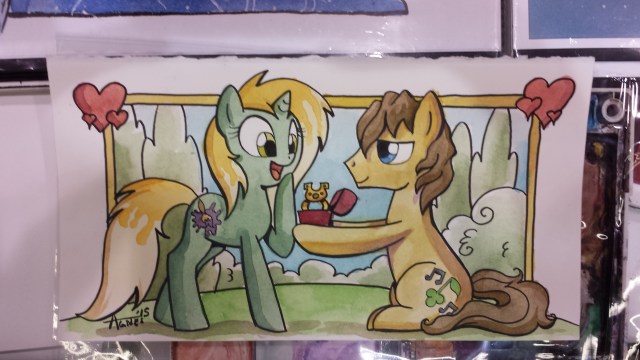 If you go to enough conventions, they all start to blur together. But sometimes, something special happens that makes one particular convention stand out. For me, that moment was a guy using My Little Pony-inspired art to express his feelings to his lady love at Emerald City Comicon.

As I walked around the show floor checking out vendors and artists, I suddenly heard cheering in the distance. Not one to want to be left out of a good party, I hurried over toward the cheers and ended up at the table of artist Agnes Garbowska, who – along with actress, Jennifer Newman – had just helped facilitate a proposal by a charming young man named Nicolaj to his lovely lady, Christina, wherein he commissioned a drawing of his pony proposing to Christina’s pony.

By the time I got to them, the lovebirds were so over the moon I couldn’t bear to bog them down with silly things like interview questions.

However, Garbowska gave me the scoop on how this all went down:

[Nicolaj] contacted me. I thought it was an awesome idea, and that I would love to be a part of it. We plotted out how to give her the art without her knowing. So I told her at the show I had a gift for her for giving me a T-shirt she made. But I told her she had to come back at 3pm. I met Jenny [Newman] on the plane. We became friends and I told her about the proposal. I also worked on the art on the plane. It was his pony proposing to hers. Jenny wanted to help, so she came and recorded it. Christina had no idea. I’m honoured to be a part of it! 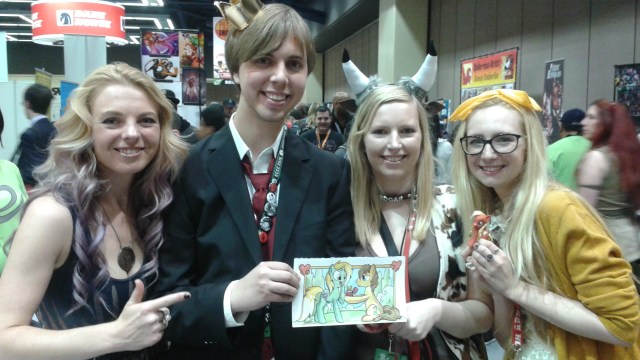 Wanna see for yourself? Check out the video of the Pony Proposal of the Year!

There’s nothing more heartwarming than a geek love connection, don’t you agree? Congratulations, Nicolaj and Christina! Wishing you the kind of happiness worthy of a party thrown by Pinkie Pie!

(Top photo and video via Agnes Garbowska; other photos by Teresa Jusino)