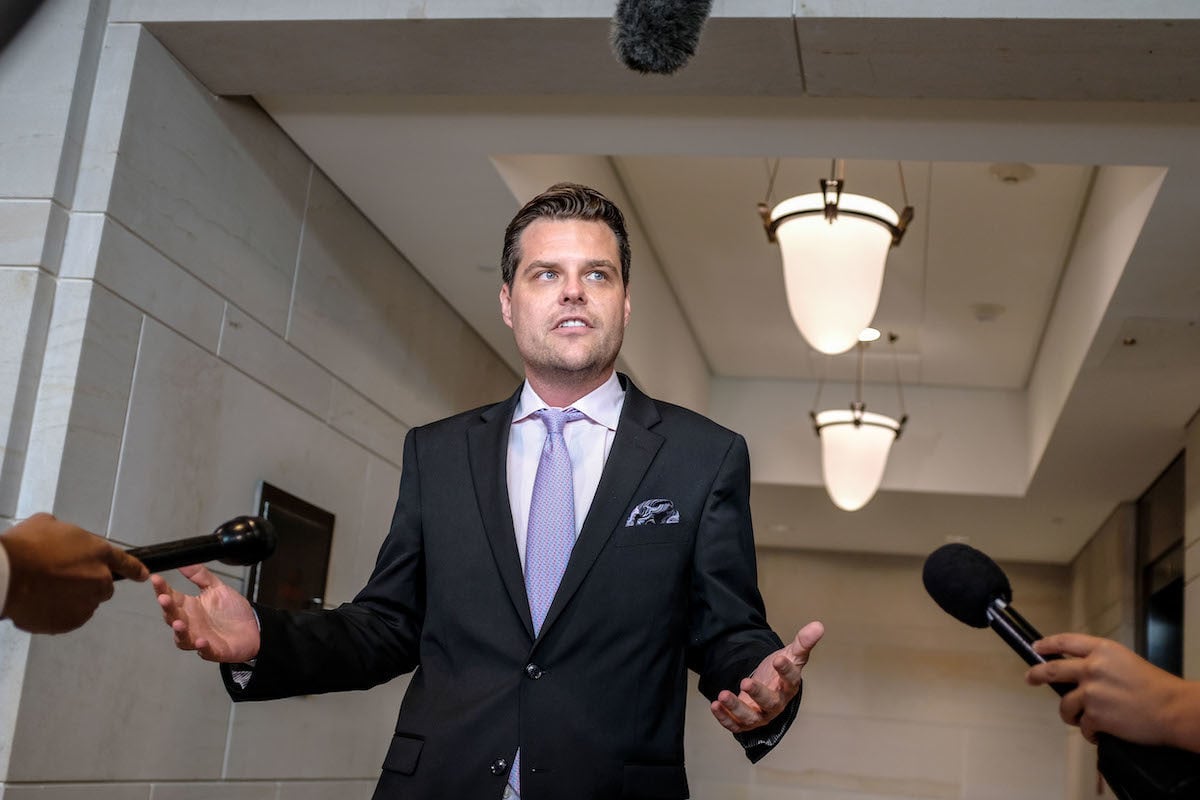 Florida Congressman Matt Gaetz is the actual worst. Whether he’s tweeting racist things or saying them on air, defending the Miami prosecutor who gave Jeffrey Epstein his infamous sweetheart deal, or trying to have a Parkland father thrown out of a congressional hearing on gun violence, he’s always finding new ways to be terrible.

Today, Gaetz was kicked out of the closed-door deposition of Trump’s former Russia adviser Fiona Hill. Obviously, Gaetz and some far-right media outlets are crying censorship and accusing Intelligence Committee Chairman Adam Schiff of being shady and secretive. But, again, Gaetz was not authorized to be at this committee-specific deposition.

After being ejected, Gaetz told reporters that he should be allowed to sit in since he’s on the House Judiciary Committee, which is not one of the three committees involved in Hill’s testimony, but is, under Chairman Jerry Nadler, conducting its own impeachment investigation. A number of committees were already conducting their own investigations before Nancy Pelosi announced the impeachment inquiry, bringing them all under one official umbrella. That does not, however, mean Gaetz is allowed access to any closed-door information he wants.

Of all the members of Congress who could possibly want to sit in on another committee’s closed-door deposition, Gaetz is likely the literal last person who would ever get that request granted since he has an actual history of threatening Congressional witnesses. Here’s what he tweeted at Michael Cohen earlier this year, right before Trump’s former lawyer was set to testify:

Gaetz deleted and apologized for the tweet, but swore it wasn’t witness tampering, just witness “testing.” (The Florida bar didn’t buy that excuse, BTW, and launched an investigation into the Congressman.)

Trump has been engaging in threats and intimidation when it comes to the current impeachment proceedings, saying the original whistleblower and those who gave him or her information are akin to spies and that they, along with Nancy Pelosi and Adam Schiff, should be arrested for treason, a crime punishable by execution.

Gaetz is a notorious Trump toady. That threatening tweet to Cohen was just the tip of the sycophantic iceberg. He’s been known to defend any stance Trump takes; he once posted a video from the “border wall,” celebrating Trump and its construction–except it turned out they were 100 miles from the border and the wall they showed was just a prototype.

The New York Times described him as having a “near-constant presence on the president’s favorite network and a penchant for own-the-libs outrageousness.” Mother Jones has explored “How Matt Gaetz Used Daddy’s Money to Become Trump’s Favorite Congressman” and how he trolled his way to political fame.

So it’s not hard to imagine why he might want to sit in on the closed-door testimony of someone with potential dirt on Trump, and it’s easy to see why Schiff wasn’t having it.

If you want to give Matt Gaetz something he really needs to pay attention to, donate to his opponent, Phil Ehr. Phil is a fellow Navy veteran and a good guy.

I’m sure a huge fundraising quarter by his opponents would give Treason Stan something else to focus on.