Elseworlds Sidelines Supergirl and Sets Up Crisis on Infinite Earths

Oh, and Ruby Rose makes her debut as Batwoman. 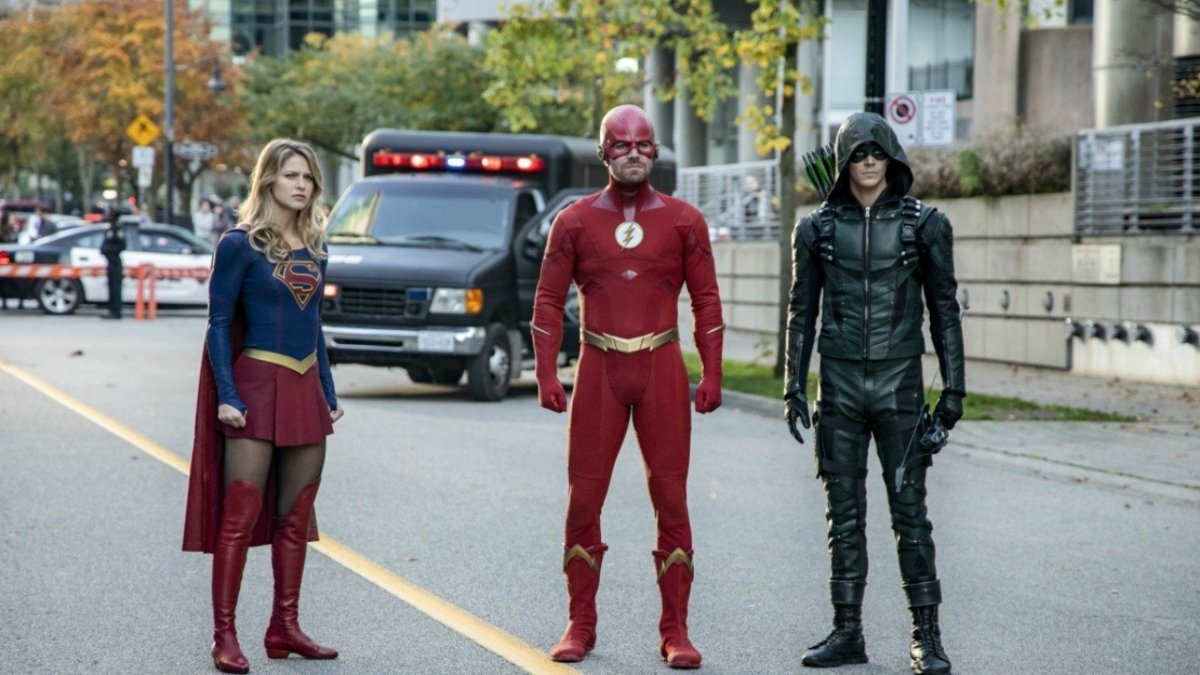 The highly anticipated Arrowverse crossover event Elseworlds ended its three-episode run last night by announcing the CW’s 2019 crossover: Crisis on Infinite Earths. Arrow has hinted at Crisis in the past, but the event was officially confirmed in the final moments of the episode, where we get a glimpse of Roger Hayden/Psycho-Pirate occupying a cell at Arkham Asylum.

But while we have a year to speculate on what Crisis on Infinite Earths will mean for the Arrowverse, let’s unpack Elseworlds. Overall the crossover was entertaining, if not as successful as last year’s Crisis on Earth-X. Granted, it’s pretty hard to top our favorite heroes kicking Nazi butt (or an Alex Danvers/Sarah Lance one night stand).

This time around, the big bad is Dr. James Deegan (Jeremy Davies) who is given the power to recreate the world when The Monitor (Lamonica Garrett) a godlike cosmic entity gives him the Book of Destiny. Deegan rewrites the history of Earth-1, causing Barry Allen and Oliver Queen to swap places. There’s plenty of body swap shenanigans to be had as Barry and Oliver struggle to convince their friends and family that they are who they say they are. The switch also means that both heroes must acclimate to each other’s abilities, with Oliver attempting to tap into The Flash’s positivity and Barry doing his best brooding anti-hero.

Meanwhile on Earth-38, Kara Danvers joins Clark Kent and Lois Lane at the Kent family farm in Smallville (props for using the Smallville theme song) where they discuss Kara’s firing from the DEO over refusing to give up her secret identity. Watching Clark and Kara bond is always heartwarming, plus we get Bitsie Tulloch channeling some serious Margot Kidder vibes as Lois Lane.

Elseworlds jams a lot of plot into three episodes, including the introduction of Ruby Rose as Kate Kane/Batwoman. While I was on the fence over Rose’s initial casting, she brings a good deal of brooding energy and flirtatious swagger to Kate Kane. Watching Kate completely disarm Kara with flirtatious talk about her tattoos is the kind of content I want to see from a Batwoman show. And then there’s the excitement of seeing a live-action Batwoman swing into battle and kicking the crap out of a fighting Flash and Arrow.

Kate and Kara have great chemistry together, and it’s a bummer that Kate resides on Earth-1, meaning she won’t get to team up with Supergirl as much (although it remains to be seen). Batwoman’s moody snark is a nice foil to Supergirl’s irrepressible sunniness, and all in all her appearance had me amped for a Batwoman spin-off series.

Unfortunately (and perhaps due to the time devoted to establishing Batwoman), Supergirl is largely sidelined in the crossover. Elseworlds spends most of its runtime on the bromance between Barry and Oliver, and even confine Supergirl to a prison for most of the third episode.

It’s Tyler Hoechlin who gets more to do, as both Deegan-Superman (in the black suit) and regular Superman, giving us some Supes-on-Supes fighting. Even though Supergirl is more powerful than her cousin, she is unable to rewrite the Book of Destiny and spends most of the episode flying the magic book to Clark.

We do get a nice moment of Kara bonding with alt-world Alex, who is still deeply closeted and rocking an awkward side-braid, aka the haircut you have when you’re queer but don’t know it yet. Kara manages to connect with her pseudo sister and gives her an “it’s okay to be gay” pep talk, which is guaranteed to hit you in the feels. So much of Supergirl‘s strength as a series comes from the bond between the Danvers sisters, so it’s nice to have that moment between them.

All in all, Elseworlds was an entertaining (if overstuffed) crossover event that sets up plenty of drama for everyone in the Arrowverse. What did you think of Elseworlds? Are you excited for Crisis on Infinite Earths? And how did you like Ruby Rose as Batwoman? Let us know in the comments.