Do you want to built a gloatman? 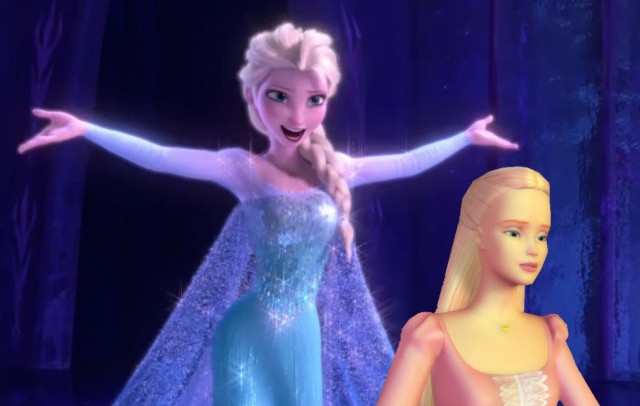 Every year, the National Retail Federation conducts a “Holiday Top Toys Survey” to find out what kids are most interested in receiving as gift for each Christmas season—and for the first time in the poll’s 11 year history, Barbie’s not topping the list. Frozen is. Awwww yeah, Barbie, how ya like them icicles!

Yup, according to the  6,593 consumer-polled survey, 1 in 5 parents are planning to buy a Frozen doll for their girl this year, but only 16.8% are also planning to purchase Barbies. Prosper’s Consumer Insights Director Pam Goodfellow said in the official NRF press release that this isn’t much of a surprise, either, as “children have had [Frozen] on the mind as far back as Halloween.”

Now, of course this isn’t exactly a coup for parents who’d like to see a little more diversity in the toys they give to their children; both Barbie and Elsa are, blond, white, and impossibly shaped. But! While Barbie is generally a cipher for teaching girls how to be generically polite and pleasing to others while totally misrepresenting the importance of STEM jobs, Elsa is all about overcoming your own anxieties and achieving self-actualization despite what some old guy from Westleton thinks. Plus, she has super cool ice powers, she’s a queen of an entire country, and she doesn’t need a plastic-haired man to make her happy—in fact, some critics even think her story lines up pretty well with a “coming out” narrative. So I’m calling this win, albeit a small one.

Meanwhile, underneath Barbie the poll also reveals that girls are also excited for Monster High dolls, Doc McStuffin toys, My Little Pony, and American Girls. Meanwhile, boys want LEGO (which is #6 on the girls list, so that’s encouraging), Teenage Mutant Ninja Turtles, cars and trucks, and video games. A lot of video games, actually. Sigh. Someday we’ll live in a world where boys can want Barbies and girls can want Xboxes too, right?