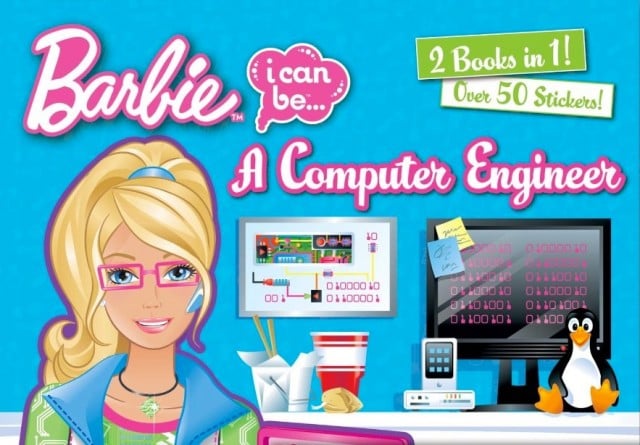 Susan Marenco, the writer behind that Barbie book with the not-so-great message about women in STEM, has spoken out in the midst of the controversy surrounding the book—but doesn’t explain why she decided to write it the way she did.

Marenco, who worked for Microsoft Development Center Copenhagen as a editor and usability designer for years, has written around fifty books for Barbie. She spoke with KTN about I Can Be A Computer Engineer, telling them that she considers herself a feminist. “I have seen the sexism in the computer industry and in a Silicon Valley totally dominated by men,” said Marenco. “It’s a boy’s game.”

Marenco went on to say that this influences her writing for children:

As a writer, when I write, I think about this and I try to replace the professional white males with Asian females. I try and I’m conscious of this, because it’s part of my political upbringing. You have to have this on the forefront of your mind or you slip back into that mindset of the traditional Barbie.

Asserting that Mattel has major control over the final product (which we don’t doubt), Marenco said that consumers should be “directing their wrath” at Mattel and not her.

They can’t get out of that groove of ‘she’s nice, she doesn’t show anger, she doesn’t show frustration.’ They need a wakeup call. When I write something, I had many editor’s comments like ‘she has to be more polite.’

Barbie is from another era, and they can’t bring her up to date. They can’t make her lose that terminal sweetness that she has.

Unfortunately, none of Marenco’s statement to KTM explains exactly why Barbie “Computer Engineer” is unable to code. It’s admirable and incredibly important that Marenco has diversity in mind while writing, and it’s true that Mattel likely needs to break Barbie out of her niceness mold, but that doesn’t change the fact that Barbie could still be incredibly polite with friends of color while also knowing how to code her own game.

Marenco did add that she’s unlikely to get another job with Mattel because of the backlash.